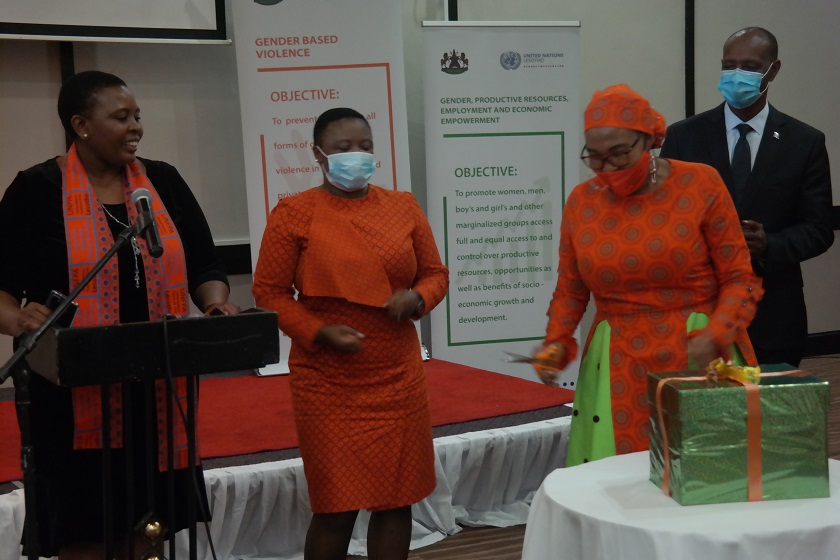 The Minister of Gender, Youth and Sports Recreation, Ms. Likeleli Tampane in collaboration with the First Lady, Mrs. Masekoalane Majoro launched a gender and development policy in commemoration of the 16 days of activism against gender-based violence, in Maseru on Wednesday.

Ms. Tampane said the launched policy seeks to bring together women and young girls with the intention to ensure the implementation of strategies geared towards curbing gender-based violence.

She said violence against women and girls is one of the most widespread, persistent, and devastating human rights violations in Lesotho surrounded by silence.

“Violence against women and girls continues to be an obstacle to achieving equality and fulfillment of human rights, the promise of sustainable development goals which is to leave no one behind cannot be fulfilled without putting an end to violence against women,” she added.

She further stated that COVID-19 changed people’s lives and as a result of the lockdown and restricted movements, reports of all forms of violence against women and girls particularly domestic violence increased.

On the same note, the United Nations Coordinator, Mr. Salvator Niyonzima said gender-based violence is a violation of human rights therefore the UN will support the government’s effort to eliminate it.

“This policy calls for Basotho to stop promoting gender-based violence in the name of culture. It is time the government ensures that the laws are being effective,” he added

“Education is key, from the culture where I come from, they say,’ when you want to straighten the tree, straighten it while it is still young,” he stressed.

Also speaking, the First Lady, Mrs. Masekoalane Majoro commended the Ministry of Gender for taking measures in empowering women and young girls against all gender-based violence.

She pleaded with Basotho to start empowering young girls at an early age thus teaching them to be independent in the future.

She added that when fundamental rights are denied, people’s ability to achieve their full potential is constrained, and economic and social progress delayed.

She pointed out that violence against women and girls continues to be a challenge in line with the sustainable development goals therefore called for the consented effort that will ensure the effectiveness of the policy.

The gender and development policy 2018-2030 is modeled to direct gender equality and equality issues in the development agenda.