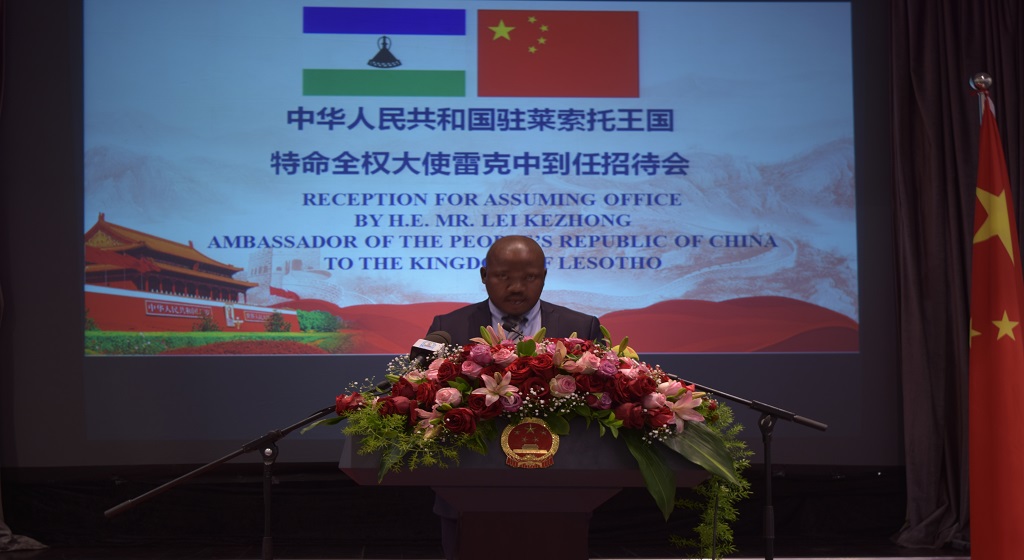 The Deputy Minister of Foreign Affairs and International Relations, Mr. Halebonoe Sets’abi says Africa and China are strongly connected as a community with a shared future.

This he said during a reception for assuming office by Ambassador of the Republic of China to Lesotho Mr. Lei Kezhong held at Maseru on Monday.

According to Mr. Sets’abi, the more than 60 years of friendship between Africa and China dates back to China’s support to Africa in the ages of anti-colonialism struggles and thus testifies that China is always a reliable friend of the African people.

He added that since the holding of the Forum on China-Africa Cooperation in September 2018, Africa and China have elevated their bilateral cooperation to greater heights through mutual trust, uplifting their friendship and practical cooperation in all fields.

“It is firmly believed by Lesotho that the cooperation between Africa and China under the Belt and Road Initiative will generate more resources and means for African development, expand Africa’s market and development space and therefore inject new impetus into the China-Africa win-win cooperation and common development,” he said.

Mr. Sets’abi said Lesotho has to implement a number of major projects such as the Maseru District Hospital and Eye Clinic, the construction of the Ha-Mpiti to Sehlabathebe Road which is already under construction as well as the Mafeteng Solar Energy Project, saying these are of strategic importance to the socio-economic development.

He remarked that the coming of Mr. Kezhong to Lesotho signifies the importance to which the government of China attaches to the relations between Lesotho and China. He pledged cooperation and support to Mr. Kezhong during his tenure of office as the Ambassador of China to Lesotho, expressing hope that his presence in Lesotho will help to strengthen the relations between the two countries.

In his remarks, Mr. Kezhong said this year marks the 25th Anniversary of the continuation of the diplomatic relations between the People’s Republic of China and Lesotho.

“25 years ago, the Basotho statesmen of senior generation, following the trend of the times, made a correct diplomatic decision of resuming diplomatic ties with the People’s Republic of China and opened a new chapter in China-Lesotho relations”, he said.

“ Over the past 25 years, based on the principles of mutual respect, equality and shared benefits, the China-Lesotho relations have forged ahead steadily and soundly on the right track, no matter how the international or regional situation evolved”, he added.

He indicated that the mutual political trust between the two countries has been continuously enhanced adding that the government of Lesotho has been committed to the ‘One China Policy’ and rendered support to China’s on issues concerning its core and major interests.

Mr. Kezhong said China has offered assistance to the best of its capacity to support Lesotho’s economic and social development as well as helped improve the lives of its people. He added that China and Lesotho have maintained close coordination in international and regional affairs adding that they both have contributed to safeguarding peace, development and cooperation around the World as well as building a stronger China-Africa community with shared future.

He stressed that China will work with other countries including Lesotho to create opportunities for world development and further contribute to building a community with shared future for mankind.

He promised to work hard to promote and strengthen friendly exchanges and cooperation between Lesotho and China hence called for cooperation for the development of the China-Africa and China-Lesotho relations.

“Let us work together to make the China-Lesotho relations a dazzling jewel in the grand China-Africa friendship crown and make our relationship a good example of bilateral relations featuring mutual respect, win-win cooperation, common development and equality of all countries regardless of their size,” he said.

China has contributed immensely to Lesotho’s infrastructure development including; the Manthabiseng National Convention Centre, the Lesotho New Parliament Building, the State Library and Archive, the China-Lesotho Friendship Middle School at Thuathe and the new State House.