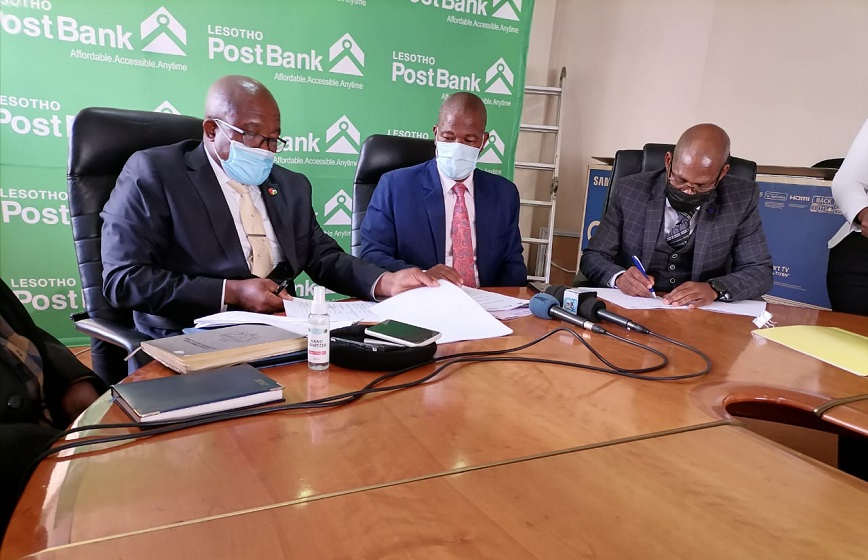 The Ministries of Finance and of Agriculture and Food Security on Friday signed a Memorandum of Understanding (MOU) with Lesotho Post Bank at the event held at the Ministry of Finance Boardroom on Friday.

The Lesotho Post bank will financially advance the purchase of tractors for farmers while the Ministry of Finance as the guarantor will open an investment account with the Bank and deposit funds amounting to M50 million.

Speaking at the event, the Minister of Finance, Mr. Thabo Sophonea said the government made a decision to subsidise farmers with 30 percent of the total cost of the tractor and its accessories, saying this is intended to keep the price of the tractors at affordable prices.

Mr. Sophonea added that farmers are expected to make a written request to the bank which will submit a recommendation letter to the office of the Deputy Principal Secretary (DPS) in the Ministry of Finance.

He noted that farmers will be given a chance to choose their preferred type of tractors, saying eligible borrowers will be identified by the Agricultural Resource Centre in their districts.

Also speaking, the Minister of Agriculture and Food Security, Mr. Likopo Mahase said this is a dream come true, saying they have been longing for this moment.

He remarked that Agriculture is the heartbeat of the country, noting that 70% of Basotho depend on farming.

He said there will be a follow-up on tractors to ensure that they are not misused, adding that the tractors are not allowed to cross the borders of Lesotho as they are intended to grow farming in the country.

He stressed that the criteria to be used when selecting eligible farmers will not discriminate both small-scale and large-scale farmers.

On the same token, Managing Director of the Lesotho Post Bank Lesotho, Mr. Leqhaoe Molefi said Lesotho Post Bank is the only bank owned by Basotho hence it is their mandate as the bank to implement government policies.

He said, in 2017, the bank established an agricultural department with the purpose to grow farming in the country, noting that since then, the bank provided loans amounting to M58 million to farmers and only 5 percent failed to pay their loans.

He expressed satisfaction over their working relations with the farmers, noting that the bank, therefore, did not hesitate to join hands with the two ministries when they needed help.

He said they are working tirelessly to help the Ministries of Agriculture and Food Security and of Finance to fulfill their mandate so to help Basotho to be independent.

The agreement between the two ministries and the bank is an ongoing project.