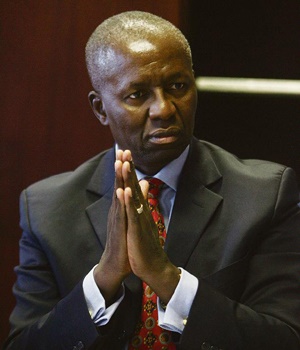 Upon arrival at the Royal Palace, His Majesty welcomed the delegation and expressed his gratitude to their call, saying he has been looking forward to meeting Chief Justice Moseneke.

The delegation’s courtesy call on His Majesty was followed by a meeting with the Prime Minister, Dr Motsoahae Thomas Thabane and his coalition partners thus; Deputy Prime Minister, Mr. Monyane Moleleki, Minister of Communications, Science and Technology, Chief Thesele Maseribane and Minister of Labour and Employment, Mrs. Keketso Rantṡo.

The former Deputy Chief Justice is expected to work collaboratively with government and stakeholders to see among others, the implementation of the national reforms.

He will also be part of the leadership forum, which is to be followed by multi stakeholder dialogue on reforms, whose deliberations will reach into the core business of the reform areas, to ensure that no one is left behind when the reforms are implemented.

A resolution to have Chief Justice Moseneke representing President Ramaphosa was taken at the SADC Double Troika Summit that was held on April 24 this year in Luanda, Republic of Angola where it was decided that President Ramaphosa will be the continuing Facilitator to Lesotho and was also recommended that he appoints high level personalities to support him.

This is Chief Justice Moseneke’s first official visit to Lesotho since his appointment as leader of the SADC Mediation Team.