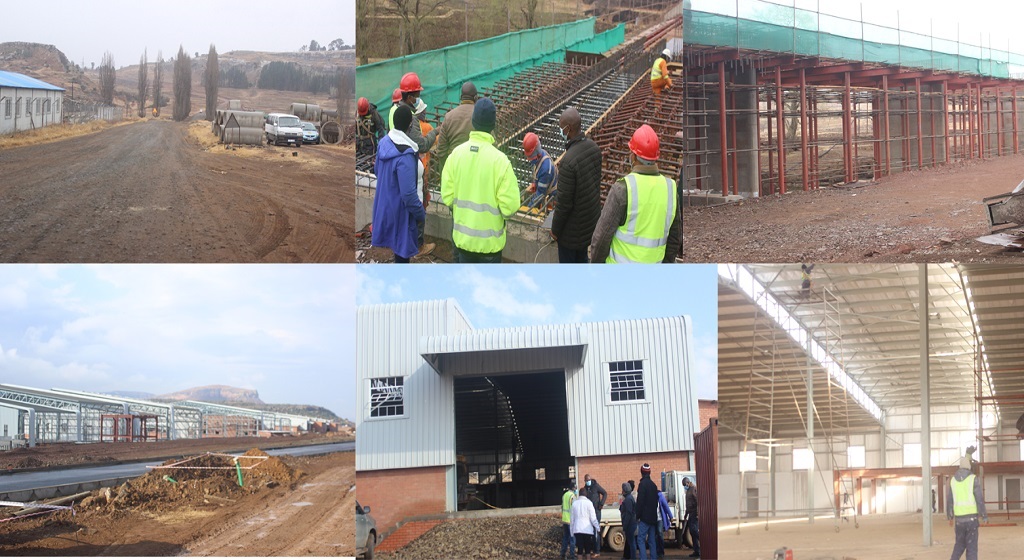 The Minister of Development Planning, Mr. Selibe Mochoboroane has expressed his gratefulness over the remarkable achievement concerning the construction of Belo Factory in Butha-Buthe and Tikoe Factory in Maseru respectively.

Mr. Mochoboroane said this during a follow-up meeting with relevant Ministries and stakeholders to identify the obstacles in the implementation and functionality of the capital projects.

“Belo and Tikoe Factory projects are within the budget of M800 million and M441 million and will be completed on estimated time as the plan is to create more factories for job creation,” Mr. Mochoboroane emphasised, noting that the congestion of investors in the manufacturing industry need urgent attention in order to open space for investors to build more factories hence address unemployment in the country.

The Lesotho National Development Cooperation (LNDC), Chief Executive Officer, Mr Seleke Seleke remarked that due to COVID-19, 3 factories had to be closed and 3,700 factory workers lost jobs while others are on short term; however noting that during this pandemic, Lesotho was exceptional as more investors came in to expand textile industry in Lesotho.

Mr Seleke said the textile industry is growing very fast in the country as more investors are on the line up to invest in Lesotho, citing one investor who is to build a factory and create 1000 jobs, another investor with 800 jobs is waiting and due to limited space some investors withdrew.

“It is very painful to attract investment with limited space which cost investors to wait for a long time to build factories” Mr. Seleke stressed, adding that after Belo factory, Tikoe Phase III Factory Project will kick off.

He added that after the completion of Tikoe Phase III construction, almost all the firms will be taken and LNDC will identify an area in Maseru to expand more factories as Tikoe is already occupied.

He said the Belo factory will accommodate 14,500 employees, which he said is the 40% of the catchment population in Butha-Buthe, adding that this Factory project is Phase I of 16 factories and the intention is to expand 51 more factories and Belo is estimated to take 41,000 employees, noting that this number is equivalent to the number of factory workers in Lesotho in the textile industry.

Mr. Seleke said the textile industry in Maseru has increased the economy of Lesotho immensely as far as the services such as telecommunications, transport and shops are concerned.

It is estimated that the project at Ha Belo will develop more economy, however as the industry grows, the Botha-Botha population will experience problem concerning infrastructure such as roads, health system, and housing need better planning to avoid overcrowding while the capacity of police need to be strengthened to control crime.

The project at Ha Belo will end in June 2021 and progress is at 70% due to COVID-19 and supply chain issues.

The M20 million Fresh Produce Market Project at Ha Tikoe was launched and handed to LNDC in 2018. Some of the shortfalls that include finding a partner to implement the project, supply chain, Basotho who are mostly not commercial farmers and setting up a fresh produce handling facility at Ha Tikoe have to be addressed to execute the project. The project will be launched in October 2020.