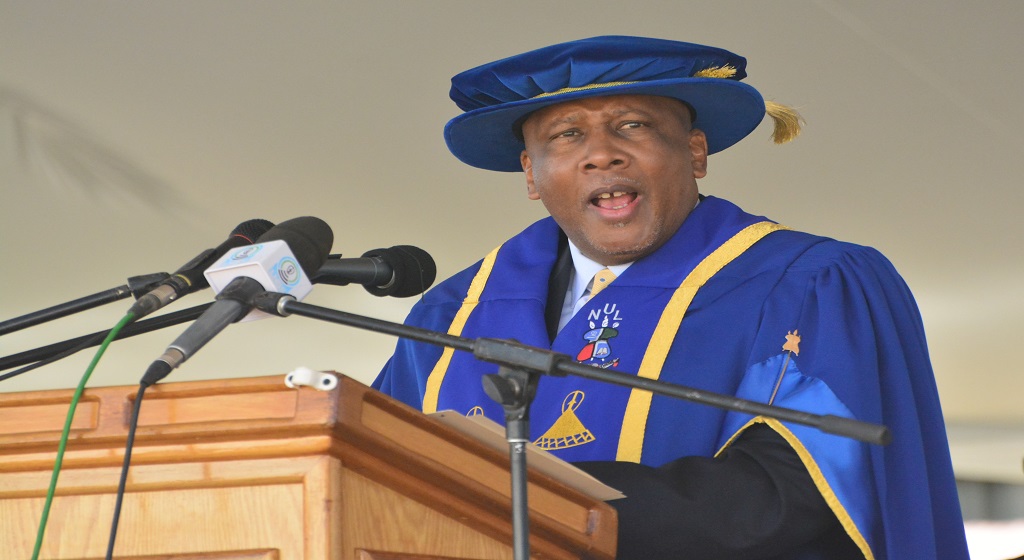 The National University of Lesotho (NUL) Chancellor, Hs Majesty King Letsie III says education remains a key to opening human potential and is essential to the development of the nation’s human capital saying it is therefore necessary that adequate and sufficient provisions are made for it even with limited resources.

This he said during the second session of NUL’s 44th convocation which saw 1050 graduands in the faculties of Education, Law, Humanities and Institute of Extra Mural Studies (IEMS) receiving certificates.

He said this ceremony takes place at a time when the role of teachers as guardians charged with the responsibility of developing children into responsible adults is important, especially in the face of social challenges that the children face.

“We need teachers to inculcate in our children discipline, morals and ethics that will put our children in good stead when their turn to assume positions of responsibility comes,” he said.

He stressed that all look up to graduands that have qualified in various teaching professions to carry out their duties with diligence, dedication and care as they shape the future leaders of the country, region and the world at large.

His Majesty said law graduands are earning their qualification at a time when the subject of law and human rights have gained great importance and relevance particularly now when crimes such as femicide, child abuse and many other crimes of intolerance seem to be taking root in the country.

He added that their task will always be to protect the weak and vulnerable as well as to serve law and justice without fear or favour.

“You are also joining the profession when our country is going through a process of reforms which includes reforms of the constitution and the judiciary. As you join this noble profession, it is our hope that you will continuously and bravely stand up to protect the independence of the judiciary and the key tenant of separation of powers,” he added.

His Majesty said the faculty of education is indebted to the Ministry of Education and Training for its collaborative efforts with the university in a range of education initiatives to improve the quality of the education system.

He noted that this year is the Lesotho education quality for equality project activities, saying the project offered international experience to staff on innovative science teaching in Asia, and through this initiative, science teaching equipment has contributed to the faculty.

Referring to the faculty of Humanities, His Majesty the faculty has also entered into a number of collaborative initiatives intended to enhance its teaching and research footprint, citing the signing of a memorandum of understanding with the University of Johannesburg’s Palaeo-Research Institute in academic research coupled with publications and training programmes. He said this collaboration entails joint proposals writing for external funding, joint sponsorship for conferences and student exchange programmes.

Also speaking, the Acting Vice-Chancellor, Professor ‘Manthoto Lephoto congratulated Mrs. Eugenia ‘Malits’itso Maleke for being the only candidate conferred with a Doctor of Philosophy in English Language and Linguistics.

She noted the NUL Innovation Hub has been a flagship in this regard, saying since its establishment late in 2018, they are happy to report that it is already making a positive difference in people’s life.

She said the hub already incubates 15 businesses and has a total of 40 staff members, commenting that it has surprised many Basotho by bringing tangible products into the local markets which many never thought Lesotho was capable of producing.

Again, Prof. Lephoto said the university has been working on a major academic transformation popularly referred to as semesterisation, saying this system, which is practiced in many South African universities and in the Southern African Development Community (SADC) region is correctly known as a Credit System.

“The credit system focuses on improving the students’ experiences to ensure that the focus is student centered and that students are at the center of learning,” she added.

She added that the university is now piloting the system to ensure that it conforms to all the standards required as it is planned that the system will operate on a phased basis starting with the first year.

Meanwhile the first part of NUL’s 2019, 44th convocation which was held on September 21, saw 1,199 graduands receiving their certificates and this brings a total of this year’s graduands to 2,249.