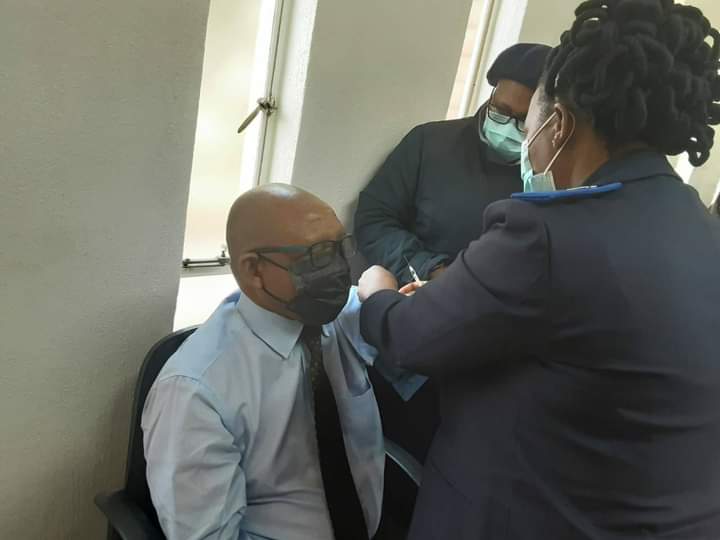 The government is awaiting 100 000 vaccines from the Republic of China which will arrive in two weeks’ time, noting that 50 000 people will get first and second dose as recommended.

The Prime Minister, Dr Moeketsi Majoro says it is important for every Mosotho to get vaccinated adding that the vaccine helps one’s body to build natural immunity for a disease before one gets sick.

He was speaking after receiving the second dose of the AstraZeneca vaccine at the Scott Hospital on Thursday.

His majesty King Letsie III, Princess Senate, and the Minister of Health and other government officials also received their second dose of AstraZeneca.

The Prime Minister said by getting vaccinated, he was giving Basotho hope that the AstraZeneca vaccine has been approved to be safeguard by specialist it is effective therefore appealed to Basotho to get vaccinated once the vaccine arrive in the country.

Dr Majoro said the government has ordered one million five hundred thousand vaccines that to vaccinate Basotho that are eligible to get vaccines.

Dr. Majoro pleaded with Basotho who have received their first dose to go for the second doze at the exact dates that they have been told to do so.

He said the government has partnered with the private sector to raise funds, saying the problem relies with   the countries that manufacture vaccines as they have started with their own people hence the distribution is slow.

His Majesty King Letsie III, the Prime Minister Dr Moeketsi Majoro, Princess Senate and the Minister of Health and other government officials got vaccinated with the first doze at Scott Hospital Morija   on the 15 March.