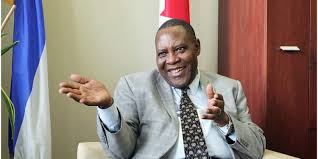 The Minister of Foreign Affairs and International Relations, Mrs. Matšepo Ramakoae has confirmed the passing on of the Lesotho Ambassador to Canada, Mr. Ralechate Lincoln ‘Mokose on Sunday.

Mrs. Ramakoae said His Excellency the Ambassador died after short illness in Canada.

The Minister expressed His Majesty’s government sadness over the passing of Mr. ‘Mokose whom she said served the government with dignity and dedication thus ensuring provision of service delivery.

On behalf of the Lesotho government, Mrs. Ramakoae expressed her condolences to the deceased family, friends and Basotho as a nation.

His Excellency Ambassador ‘Mokose served the Government of Lesotho as a diplomat in different countries thus;

His Excellency also served the government of Lesotho as Minister in different ministries such as Water Affairs, Forestry and Land Reclamation as well as Agriculture and Food Security between 2003 and 2016.

In 2016, together with the former Deputy Prime Minister and Leader of the Alliance of Democrats (AD) political party, Dr Monyane Moleleki founded the AD after defecting from the Democratic Congress (DC) which was then led by former Prime Minister, Dr Pakalitha Mosisili. He served as Secretary General of DC. In May 2002, he was elected a Member of Parliament (MP) representing the Lesotho Congress Democracy (LCD) political party for Kolonyama Constituency. Following his election into Parliament, he was elected the Deputy Speaker of the National Assembly in June 2002 the position he held until March 2003. Between September 1982 and December 1985, he was in political exile in Swaziland.

His Excellency Ambassador ‘Mokose held Bachelor of Arts (Honours) in English from the National University of Lesotho (NUL) in 1981. In 1980, he obtained Concurrent Certificate in Education also from NUL and the Advanced Teachers Course from the Morija Training College in 1974.

Besides his political career, he worked as Assistant Teacher in various schools that include; Leribe Secondary School, Cana High School, Leribe High School and Vuvusane High school in Swaziland. In January 1987, he led the Leribe High School as Headmaster until December 1991. He joined the Ministry of Education as Chief Inspector in January 1992 and served until July 1994.

His Excellency Ralechate ‘Mokose was born on February 24, 1949 at Kolonyama in the Leribe district. He is survived by his wife, two sons and a daughter.