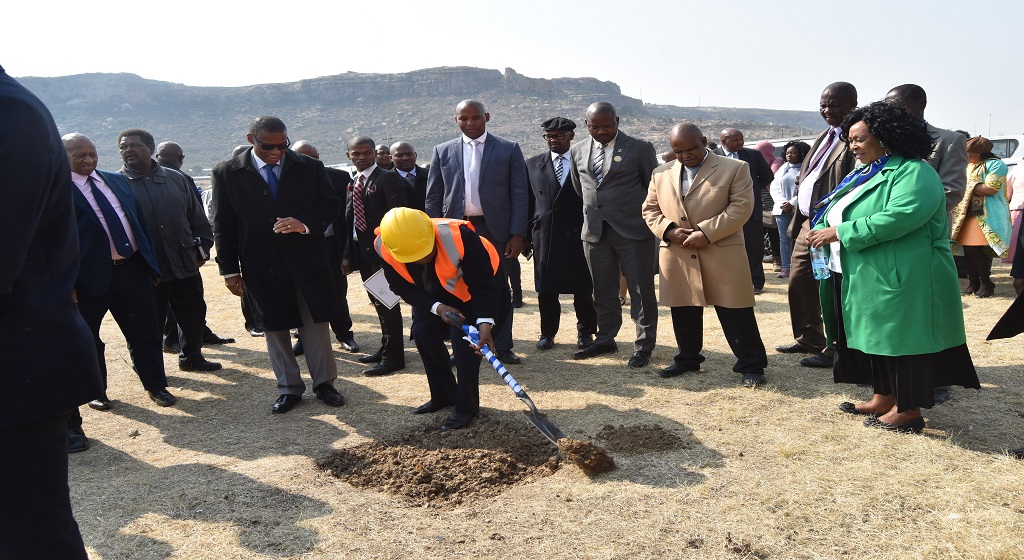 The Prime Minister, Dr Motsoahae Thomas Thamane says Parliament has allocated M58 million to the Ministry of Education of which M6 million is meant for construction.

Dr Thabane was speaking on Monday during the sod-turning of the construction of classrooms to be built in 34 constituencies country-wide and the official opening of the four classrooms which were constructed at Leqele Combined School, last year.

He added that following the sod turning, it is expected that 97 classrooms will be constructed in 42 primary and secondary schools and that 11 Science laboratory, toilets for both learners and teachers will also be built, saying most of these schools are those found at the foothills and highlands of the country.

Again, the Prime Minister noted that the project which will benefit schools owned by churches, community and government is expected to be completed before the end of this year.

Dr Thabane mentioned that the initiative is in line with the country’s National Strategic Development Plan and other international agreements, adding that the  purpose is to ensure that all have access to education.

He therefore urged those who will construct the classrooms to take good care of environment in order to overcome some of the challenges that are posed by climate change. He also promised teachers that the government is doing its best in dealing with their grievances so to create a conducive environment that will enable them to perform their duties without hindrance.

Dr Thabane also condemned the attacks made to the Member of Parliament for Lithabaneng, Mrs. Matebatso Doti, saying police are working tirelessly to ensure that  perpetrators in this case are brought to book.

At the same event, the Minister of Education and Training, Professor Ntoi Rapapa the classrooms constructed at Leqele Combined School will be of great help to the school as it has a roll of 2675 learners who perform well hence congratulated them for always having top ten achievers.

Also speaking, Member of Parliament for Lithabaneng Constituency, Mrs. Doti thanked the government for this great initiative, saying it will make a huge difference to communities within the constituency as majority of the learners are vulnerable since they study through government grants offered by the Ministry of Social Development.

Member of Board, Mrs. ‘Matsietsi Phaila commended the government for this great gesture, however, noting that Leqele High School has a roll of 1500 learners, 23 teachers of which 16 are paid by parents hence appealed to government for grants as a way of acknowledging the school’s good performance.