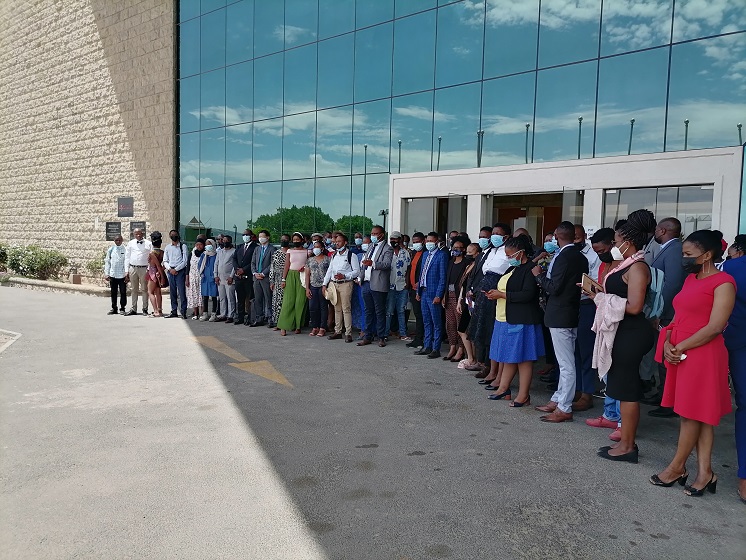 The Prime Minister, Dr Moeketsi Majoro says the government and private sector need a collaborative effort to fight the rate of unemployment.

He said this when officially opening the three-day Youth Job Summit held at Mathabiseng Convention Centre.

He said the youth policy should cater for all Basotho youth regardless of their education status saying nobody will be left behind.

Dr Majoro said the government needs direction and trust from youth saying stakeholders need to work cooperatively with youth in developing policies that would shake the development of the country.

He said a summit is a co-development event and Lesotho must transform to build the future that the youth aspire, especially in a digital sustainable economy.

He added that young people in remote areas do not have access to digital space due to inequality, noting that it is therefore the government’s role to roll out that capability to all youth.

He, therefore, commended the Youth Task Team for working hard towards reaching their goals, saying the government is going to attend to their concerns.

Giving her remarks, the Principal Secretary in the Ministry of Gender and Youth, Sports and Recreation, Dr Mamoeketsi Ntho said the ministry established the Youth Interim Task Team so that they would voice their opinions and say how they want to be helped.

She noted that the private sector is willing to work hand in hand with the government to help curb the high rate of unemployment in the country, saying the job summit will help address other concerns of youth.

She, therefore, expressed hope that by end of the summit, stakeholders will come up with a document that would change the lives of the youth for the better.

Also speaking the Private Sector Competitiveness Representative, Mr. Chaba Mokuku commended the Ministry of Gender and Youth, Sports and Reaction for working together with youth in making this day a success.

He said that the complexity of youth unemployment requires the collaborative approach, saying the government cannot resolve this issue alone hence the government must create an enabling environment for investment for the private sector.

He remarked that in Lesotho most employment is in the government, noting that this situation must change and create jobs in the private sector.

Mr. Mokuku said the World Bank is in the process of designing a new project to support diversification of the economy and supporting the government in the ecosystem of entrepreneurship.

On the same token, the World Bank Representative, Dr Yoichiro Ishihara congratulated the Youth Task Team and youth for holding this job summit, saying he has been in this country for quite some time and it is not easy to organize a summit.

He said World Bank has created a five-year strategic framework where they will implement strategies and policies to be made during the summit so to address challenges facing the youth.

The summit comes after the department of youth held a stakeholders’ virtual meeting in August where stakeholders discussed issues relating to youth unemployment and proposed Youth Summit. This meeting was organized by the Prime Ministers Delivery Unit in collaboration with the Accountability Unit.