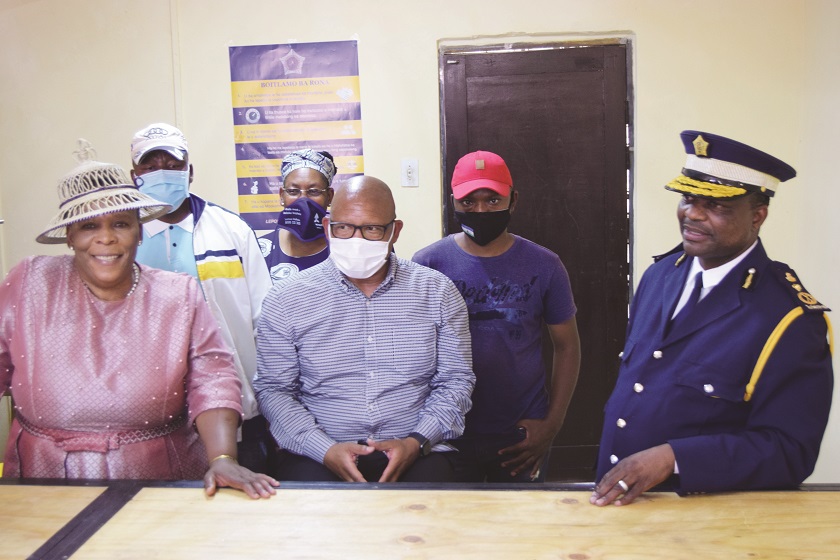 The Prime Minister, Dr Moeketsi Majoro has pledged government commitment to support the police with necessary resources and training that will help them to diligently carryout their duties.

Dr Majoro was speaking during the official opening of the ‘Qoaling Police Post’ held at Qoaling on Saturday. He said these killings are perpetrated by Basotho to other Basotho using illegal firearms.

He expressed his concern that the escalating crime rate that include murder where illegal firearms are used are perpetuated by Basotho against other Basotho, noting that lately, young men engage in elderly and women abuse which end up in brutal killings of these victims.

Again, he noted that recently, the killings are targeted at the foreign nationals, citing the killing of a Chinese medical doctor in Mafeteng which was followed by others at Maseru Mall and Ha Tsolo.

Dr Majoro therefore thanked the Qoaling community for voluntarily initiating to have a police post with the intention to curb escalating crime in the area, hence appealed for their continued support to the police by giving them necessary information that would lead to the arrest of the criminals in the area.

The Prime Minister expressed concern over a number of illegal firearms in the country, saying he wonders where they come from, who is behind bringing them in the country and for what purpose.

He further commended the Qoaling community for establishing ‘Qoaling Re Lelapa Association’, which was formed with the aim to fight against criminal activities within the community, saying it was a good example for other villages to follow.

Also speaking was the Minister of Police and Public Safety, Mrs. ‘Mamoipone Senauoane who said the police are ready to face criminals and fight crime.

She noted with gratitude that in a space of three months, six new police posts have been opened with the purpose to curb criminal activities in the country.

Mrs. Senauoane therefore commended ‘Qoaling Re Le Lapa Association’ for the initiative to have a police post where it (association) also provided a site for the police post until there is a government site to build a police post in Qoaling.

Speaking at the same occasion, the Commissioner of Police, Mr. Holomo Molibeli said the initiative to have a police post in the area began as a joke during the confession of the Qoaling community at the church service held at the Loretto Mission in Qoaling earlier this year.

He reminded the community of his speech on that day where he promised to bring the police post if a site could be provided for such a purpose.

The Police Commissioner commented that now that the joke has become a reality, he was going to deploy police at Qoaling Police Post who will work in the area to fight crime.

He warned the police not to use the police holding cells as a place of torture in which suspects will be killed, saying police are not judges but rather officers entrusted to protect citizens thus investigating cases, arrest suspects and hand them over before the courts of law for judgement.

Furthermore, Commissioner Molibeli appealed to Qoaling community not to take advantage of the police presence in the area and attack them.

‘I am not bringing the police here to be assaulted by being stabbed or bitten with sticks,” he stressed, saying if in danger, police will defend themselves when they are attacked and their lives are in danger.

The Police Commissioner further appealed to those in possession of illegal firearms to voluntarily hand them over to the police or will face law.

Speaking on behalf of the ‘Qoaling Re Lelapa Association’ the spokesperson, Mr. Teboho Molapo related how the association was formed in August by not more than five women, saying this has now grown to 250 registered members who are men and women born at Qoaling. These members have been drawn locally and those currently based in other countries such as Scotland and Port Elizabeth in South Africa.

He said they have a common purpose of fighting crime and initiating development activities so to change the mindset about this area as it is known as a hotspot of crime.

The event was graced by performances from different groups in Qoaling and the police band.

The new police post comprises of three offices that includes a reception and two offices.