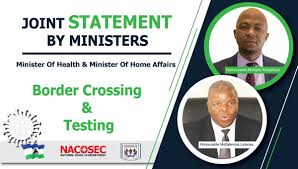 The Minister of Health, Mr. Motlatsi Maqelepo has expressed worry over the increasing COVID-19 positive cases in the country.

This he said during the media briefing held at the National COVID-19 Secretariat (NACOSEC) offices where he noted that the country is currently experiencing a high number of COVID-19 case reporting in different districts of the country like Butha-Buthe, Leribe and Mokhotlong.

He said numbers have increased due to the high influx of Basotho crossing from South Africa into the country and social gatherings especially festivals and parties taking place during this festive season, saying people attending those events fail to adhere to COVID-19 protocols like social distancing and wearing of masks.

He noted that this could result in an increase of infections, patients in health centres, deaths.

He commented that this might result in migrant workers not being able to return to work, stressing that this could lead to hard lockdown which he noted had an immense impact on the economy, job losses and other income-generating activities.

“Every person coming into the country but who is not a Lesotho national should have a 72 hour COVDI-19 clearance certificate while Basotho who do not have the certificate will be tested at the ports of entry and advised to home quarantine, “ he added.

He appealed to all Basotho who have the capacity to come with a clearance certificate for COVID-19 to do so saying this is to reduce the number of tests conducted at ports of entry.

He stressed that those who come through illegal ports of entry will be tested therefore urging them to use legal ports.

Again, Mr. Maqelepo indicated that as part of measures to curb the spread of COVID-19, the ministry’s personnel together with NACOSEC will embark on massive testing at social gatherings, saying they will work together with security agencies to ensure that each and every person attending social gatherings is tested.

At the same media briefing, the Minister of Home Affairs, Mr. Motlalentoa Letsosa said there are six ports of entry open namely; Van Rooyen’s, Maseru, Maputsoe, Sani Pass and Qacha’s Nek saying that all Basotho who overstayed in South Africa during the lockdown period thus between March 26 and October 01 will be pardoned and their passports will not be destroyed.

He added that those who stayed in South Africa from October last year until November this year will not be part of the pardoned category.

He noted that this agreement between Lesotho and South Africa regarding the validity of passports is based only on ports of entry, saying as government, they do not have any control over roadblocks in some parts of South Africa which Basotho claimed to have been arrested during such roadblocks as they did not have passports.