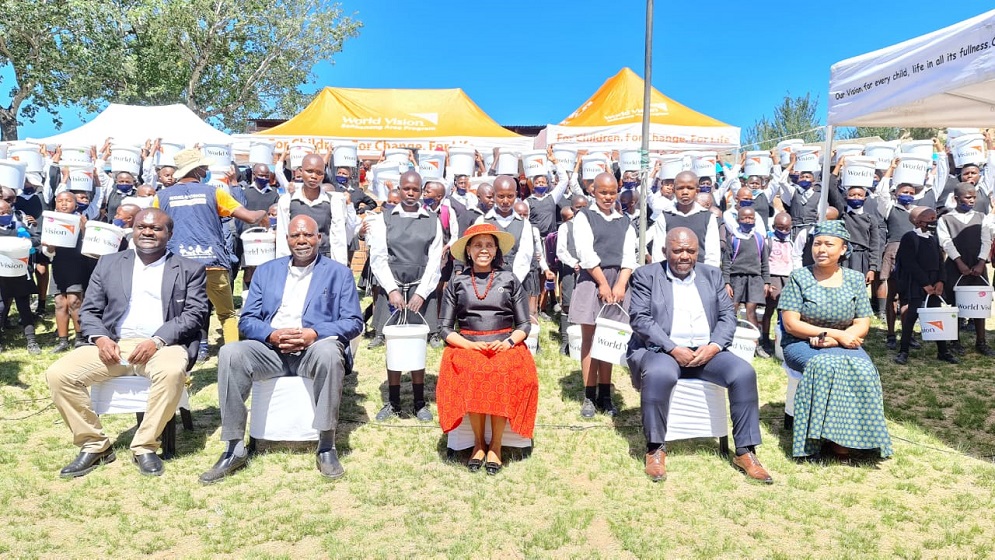 Her Majesty Queen ‘Masenate Mohato Seeiso has called on different stakeholders to unite and advocate for the availability of free sanitary pads for girls in all schools and their wellbeing to boost their confidence during their menstrual periods.

Her Majesty made these remarks on Monday after presenting 150 dignity kits to Thaba-Lesoba Primary girls in celebration of the International Girl Child Day event organised by World Vision Lesotho under the theme, ‘‘My voice, our equal future’.

She stressed that the lack of sanitary pads for girls during their periods is a critical challenge that requires unity among different stakeholders in order to ensure their wellbeing, adding that failure to have such necessities can have a negative impact on their performance at school and also make them lose their confidence.

Her Majesty noted that the lack of sanitary towels for girls should be treated as an emergency so that they can find such necessities readily available in schools in order to relieve teachers from the pressure of contributing their personal money with the aim to buy sanitary pads for girls.

She highlighted that the world is faced with COVID-19 and its impact has affected all aspects of life and world economies, saying the problem is more intense for vulnerable families.

She added that  World Vision has conducted a study on how COVID-19 has affected the lives of children and it has revealed that 72 percent of people have shown that food prices have increased drastically whereas most breadwinners have lost their jobs while the rate of girls who got married has increased by nine percent and 24 percent under-aged (less than 18) also got married.

Her Majesty stressed that by investing in a girl child’s education, the nation benefits as that promotes the country’s economic growth hence help the country to achieve the Sustainable Development Goals (SDGs). She, therefore, emphasized that there is a need to start now to groom such a young generation in order to have prominent leaders who will be resourceful for the development of the nation.

She said much as the country has developed laws protecting children with the aim to ensure that their human rights are well taken into consideration, there is a need to ensure that such laws are adhered to, saying if such laws cannot be implemented they will be useless.

Speaking on behalf of World Vision, the National Director, Mr. James Chifwelu said as a child-focused Christian based organization they are happy to participate at the event as it defines their vision, noting that their presence at the event is to emphasise the importance of protecting children more especially a girl child.

Mr. Chifwelu said marking such a noble event does not mean they are only protecting a child today but it is their daily activity and they are reflecting back on what is happening in our respective communities and globally over the way a girl child is treated, hence they are acknowledging the importance of International Girl Child Day.

He said since World Vision has been in Lesotho, they have participated actively in various forums in promoting the wellbeing of the most vulnerable children, saying they have supported various advocacy efforts to advocate for amendment of laws that protect children.

Mr. Chifwelu expressed World Vision Lesotho’s appreciation over Her Majesty’ commitment and being a champion of pioneering the girl child protection issues, adding that as World Vision Lesotho they are also extending a helping hand in ensuring the availability of sanitary pads for girls, moreover there is still a need to improve a reporting mechanism so that no case of child abuse can go unreported.

Speaking on behalf of the Minister of Social Development, the Minister of Public Services Mr. Keketso Sello said International Girl Child Day was observed after having realised that a boy child has greater opportunities than a girl child and as per African norms, a boy child is considered to be very important than a girl hence many girls lose their confidence.

Mr. Sello stressed that government is concerned about the increasing rate of abuse cases and brutal killings of women and girls, saying this signifies that the country needs to invest more in developing a girl child. He noted that among the initiatives being taken by the government include reviewing laws aimed at protecting children’s welfare and advocated for the establishment of a child helpline with the aim to report any form of abuse.

Bela-Bela Member of Parliament, Mr. Lits’oane Lits’oane said a girl child plays a bigger role in human life and as a result if every individual can understand that Lesotho can be a better place.

He added that the country has made laws through the ministries of Social Development and of Gender and Youth, Sports and Recreation which aim at protecting children, noting that failure to ensure their implementation can badly affect the society.

Mr. Lits’oane expressed concern that lack of information about such laws is still a critical challenge looking at the rate at which elderly people are abused and the way at which girls are rape, furthermore child protection has to emanate from their respective families.

He said if a girl child does not enjoy the freedom of movement, there is a challenge and it needs people to stand united in creating a crime-free environment, saying one of the latest problems is that some people are fearful to provide a tip off about any cases of abuse.

When expressing some challenges faced by a girl child, one of Thaba-Lesoba Primary Schoolboys, Mohau Rasello said though girls are future mothers, they encounter physical abuse and harassment, child marriage and school dropout and some are homeless.

Rasello recommended that all kind of abuse towards girls should stop, saying girls must go to schools and those without parents should stay with relatives. He added that every child must be documented and have a birth certificate that will be used at the Ministry of Social Development for bursaries.

The event was graced with the presence of police-specialised unity of Child and Gender Protection Unit (CGPU) and entertainment which includes cultural songs, poems.