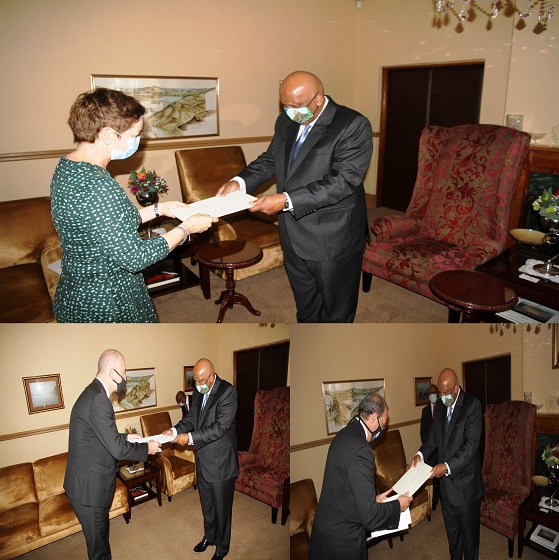 When accepting letters of credence from the Italian Ambassador, Mr. Cuculi, His Majesty said the country recognizes the assistance of Italy through the European Union (EU) which has enabled the country to make tangible strides in the areas of development.

His Majesty said the country has received assistance in economic infrastructure from the government of Italy through the EU, saying Lesotho aims to achieve progress in the areas of Agriculture, tourism, agriculture and renewable energy through the support of Italy.

Presenting his letters of credence, Mr. Cuculi said Italian companies have been active in the Lesotho major water projects and road infrastructures thus attaching high priority to environmental sustainability, further recalling the Lesotho Highlands Water Project aimed at providing water to the region and electricity to feed local industry while ensuring that an increased number of people can access basic services as one of them.

He also said both countries signed a Memorandum of Understanding to enhance cooperation in the health sector in 2016, noting that the current pandemic has shown the world how essential it is to join forces and strive together to protect the lives and health of people.

On the other hand, when accepting letters of credence from Ms. Gilsenan, His Majesty noted with gratitude that the relations between both countries can be traced to 1800 years, citing the presence of one of the Missionaries in Lesotho during those years.

He also noted with gratitude the Ireland support through the Irish Aid in various sectors such as health, agriculture and water supply, saying other issues of cooperation can be explored further to cement the mutual relation between the two countries.

Ms. Gilsenan said the mutual relations of over 40 years between both countries signifies Ireland’s commitment in supporting the country to achieve its goals.

She said the fellowship programme provided by Ireland to Basotho students to study in Ireland by gaining expertise in different fields will enable them to contribute towards the economic development of Lesotho.

Accepting letters of credence from Denmark Ambassador to Lesotho, the King noted the financial assistance from Denmark in 1970 and 80 for infrastructure development through the European Union.

On the other hand, Mr. Elling Rehfeld said both countries share mutual relations which have been cemented by Denmark’s support to Lesotho in the Health, Infrastructure, Education and Trade sectors.

His Majesty, therefore, reassured the Ambassadors of the country’s full support during their tenure of office.