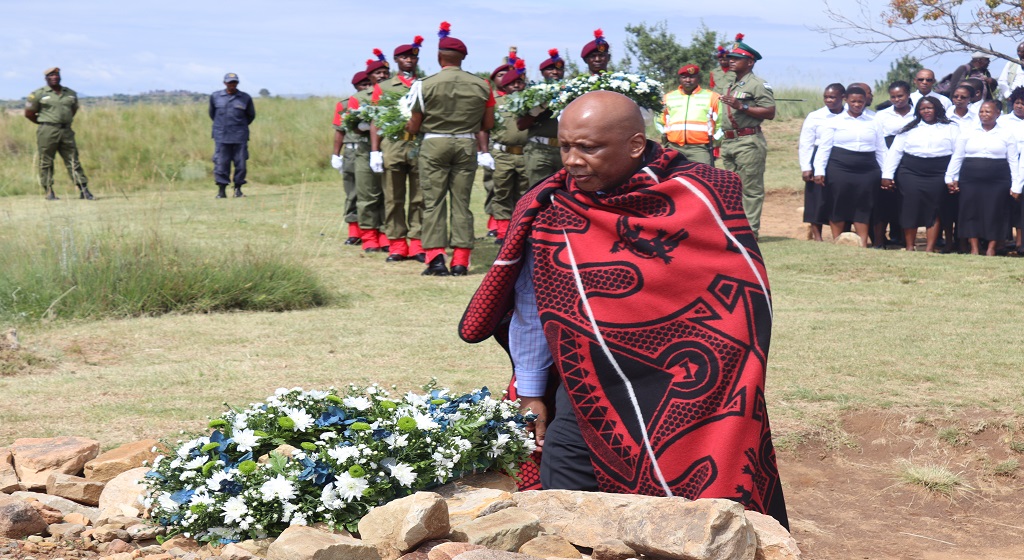 As part of the annual commemoration of Moshoeshoe’s Day, His Majesty King Letsie III led the laying of wreaths on King Moshoeshoe I’s grave at Thaba Bosiu on Wednesday.

The laying of wreaths was followed by a traditional prayer and prayer service led by the Christian Council of Lesotho (CCL) at the Lesotho Evangelical Church in Southern Africa (LECSA) premises.

Speaking at the ceremony, Arch Bishop Tlali Lerotholi of the Roman Catholic Church said Lesotho marks the 150th year since King Moshoeshoe I passed, saying this is a milestone, which needs to be commemorated.

Arch Bishop Lerotholi described King Moshoeshoe I as a visionary, peace loving leader and founder of the Basotho nation who should be celebrated.

He said it is now almost 200 years since he founded the Basotho nation at Thaba Bosiu, which he described as a holy place on which the nation should converge when seeking divine intervention.

“I therefore appeal to the present generation to take example of his visionary leadership so that Lesotho could be a better place to live for all,” he remarked.

Speaking in an interview, some of the youth present at the commemoration welcomed the celebration, saying it reminds them of their culture and history as a nation.

Present to grace the event include Her Majesty Queen Masenate Mohato Seeiso, chiefs, members of the Diplomatic Missions, Cabinet ministers and the public who glad in their traditional attire performing traditional songs and dances.
King Moshoeshoe I was born at Menkhoaneng in Leribe in 1786. He was the first son of Chief Mokhachane and Kholu. He was given the name of Lepoqo by his parents and later named Letlama after initiation. He died on March 11, 1870 and was buried at Thaba Bosiu.