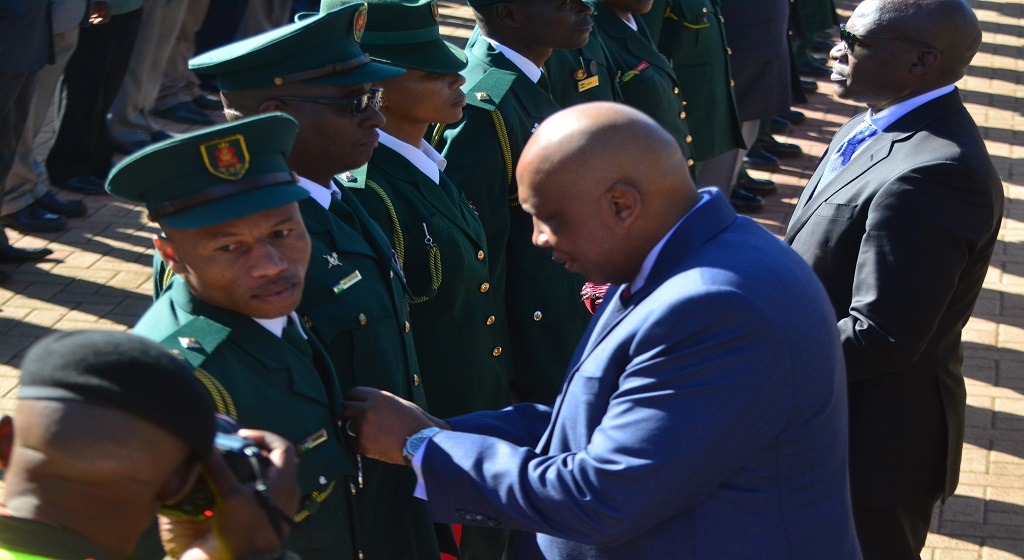 His Majesty King Letsie III presented awards and medals to 542 members of the Lesotho Defence Force (LDF), Lesotho Mounted Police Service (LMPS), Lesotho Correctional Services (LCS) and Civilians at the ceremony held at the Royal Palace in Maseru on Thursday.

The presentation of awards forms part of the activities in celebration of 56th King’s Birthday due on July 17.

His Majesty bestowed medals for meritorious service, gallantry, subordinate, outstanding service as well as loyal and long service of 10, 28, 25 and 30 years.

Among the members of disciplined forces who received the medals included LCS Assistant Commissioner Teboho Masenkane for loyal and long service of 25 years.

Civilians also received awards in the categories of health, initiation, education and entrepreneurship among others.

In a brief interview, Dr Mpolai Moteetee  who received an award for best health care and running the National AIDS Commission (NAC) said working hard and dedication for one’s nation is a blessing, saying though one could not realize it at the time of service, it is a good thing especially if one’s hard work is being noticed and appreciated by the people.

Dr Moteetee expressed gratitude over the award giving ceremony, saying receiving an award means a lot to her and her profession as well.

On the other hand, Ms. Libuseng Titi who received the best entrepreneur award and Lesotho Blanket Designer expressed happiness for the recognition, commenting that it is the Grace of the Lord that her work gets appreciated.

The 2019 National King’s Birthday celebration will be held at Sebapala in Quthing on Wednesday next week.

His Majesty King Letsie III is the first son of the late King Moshoeshoe II and the late Queen ‘Mamohato Bereng Seeiso. He was born at Scott Hospital in Morija on July 17, 1963. He was named Mohato David Bereng Seeiso.