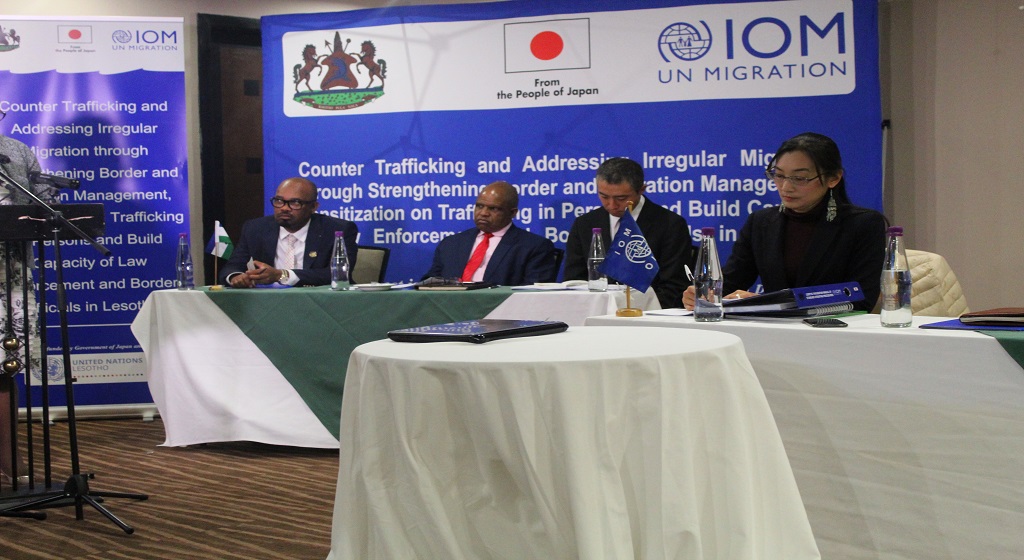 The Minister of Home Affairs, Mr. Mokoto Hloaele says human trafficking is a priority for different government ministries hence the government has adopted some of the International plans of action to combat it.

These, he said during the launch of Phase II project on Counter Trafficking and Addressing Irregular Migration Through Strengthening Border and Migration Management, Sensitisation on Trafficking In Persons and Building Capacity of Law Enforcement and Border Officials.

The project is financially supported by the International Organisation for Migration (IOM) and the government of Japan. It is intended to among others, demonstrate greater readiness or willingness to avoid risks of irregular migration, smuggling and trafficking.

Mr. Hloaele said the National Counter Trafficking in Persons Strategic Framework and Action Plan contains a compilation of international and national laws and good practices developed to combat human trafficking, saying it offers guidance on how national legislation can be brought in line with international standards.

He further mentioned that government views migration as an enabler for development through remittances in both income and skills transfer hence makes all possible ways to maximize positive impact of migration and minimize the negatives.

Mr. Hloaele therefore thanked IOM and the Japanese Government for the support they give to Lesotho, saying Government of Lesotho has benefited from IOM and Japan in many ways that include revamping of border sites with equipment in the form of computers, boom gates and CCTV cameras both at Qacha’s Nek border and Van Rooyen’s Gate.

Ms. Nishumura said the new project will improve knowledge and coordination among the Child Gender Protection Unit (CGPU) staff, and train district administrators, border officials and prosecutors on counter trafficking to facilitate the identification investigation and referral of tip off cases.

She said this will be made possible through training of at least 30 members of the LMPS from CGPU department, adding that immigration standard operation procedure implementation will involve training of trainers, installation of boom gates at two borders, installation of Closed-Circuit Television (CCTV), provision of vehicles and document examination kits to the immigration department.

Also speaking was the Deputy Commissioner of Police, Paseka Mokete who expressed concern that many of Basotho are exploited in other countries because they were falsely promised to get jobs but given something else when they get there.

He revealed that there are 56 cases of human trafficking of which only 15 have been investigated and are before the courts of Law.

He mentioned that the Lesotho Mounted Police Service (LMPS) in cooperation with other stakeholders conduct human trafficking campaigns through different media platforms to sensitise the public about its negative impact, however saying since human trafficking is transitional by nature cooperation from other countries is poor.

Again, the Deputy Commissioner noted that victims of human trafficking are hostile as they do not regard it as crime but blame themselves and fail to give evidence, saying this is another challenge to law enforcement agencies.

Phase II of the project will target Moshoeshoe I International Airport including the Mafeteng and Qacha’s Nek Border Posts.

Phase I was launched in 2018 and targeted the two borders of Mafeteng and Qacha’s Nek.
.