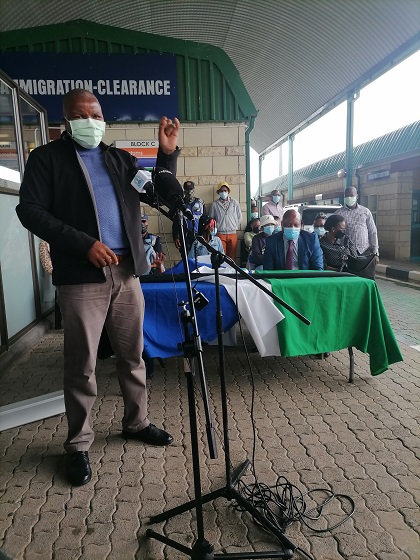 The Minister of Home Affairs, Mr. Motlalentoa Letsosa on Wednesday received a 22-year old victim of human trafficking at the Maseru Border Post.

The trafficked woman from Thaba-Tseka was handed over to the Minister by the Lesotho Consulate General in Johannesburg, Mr. Liranyane Thamae.

When handing over the victim, Mr. Thamae said the woman was trafficked in 2019 with her 4-months old baby for a better job by a Maputsoe resident who works in Pretoria, South Africa as a herd boy.

Mr. Thamae said when taken to Pretoria, the victim was working in Maputsoe as a domestic worker and the culprit promised to offer her a better job.

He said the victim reported that upon her arrival in Pretoria, the culprit who also threatened to kill her, raped her with other six men and that this happened from the first day and continued daily.

Mr. Thamae said investigations show that the woman fell pregnant and that when giving birth, she was by herself without any medical assistance.

He said reports reveal that people who live in the neighbourhood noticed her and reported the matter to the police and the culprit was taken to police custody.

“Investigations concerning the matter have been completed and are waiting for the trial day,” he said.

Mr. Thamae expressed his disappointment over this matter, saying Basotho are always trafficked by other Basotho hence appealed to Basotho to be cautious as human trafficking is real.

Speaking at the occasion, Mr. Letsosa said human trafficking is an international crisis, hence needs collaborated efforts from global leaders to stop it, saying countries should come up with strategies that will help in combating human trafficking.

The Minister noted that this comes at a crucial time as he is on a mission of raising awareness on human trafficking countrywide.

Mr. Letsosa, therefore, urged young girls to be careful when they are promised jobs, saying they are not trafficked by strangers but the people they know well.

He promised that the victim will be put under the supervision of the Ministry of Social Development and will be handed over to her family once she has fully recovered.

Mr. Letsosa thanked the department of Social Development in South Africa for taking care of the woman and her children for over a year while investigations were continuing.

This is the second victim of human trafficking by the same Maputsoe resident and investigations regarding the other victim are continuing.