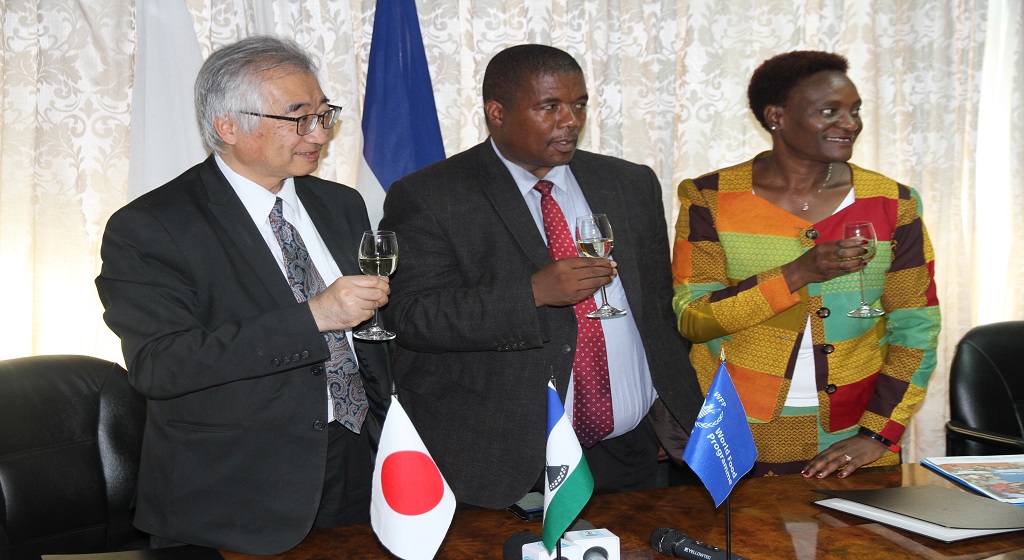 This was disclosed at the signing of the Exchange of Notes between the World Food Program (WFP) Lesotho and the Government of Japan on the Food Aid for Lesotho School Feeding Program on Monday in Maseru.

On behalf of the Government of Japan, the Minister Counsellor of the Embassy of Japan to Lesotho, Mr. Shuichiro Kawaguchi said the government of Japan has decided to implement a new food aid through WFP by making approximately M27 million available for the procurement of about 310 tons of tinned fish from Japan.

“The tinned fish procured under this food aid through WFP will be distributed mainly to schools all over Lesotho, and is expected to improve the nutritional condition of children,” he said, adding that they are aware that there has been a serious food shortage, especially in the rural and remote areas of Lesotho due to the prolonged dry spell and localized hailstorms during the planting period.

He said these led to massive reduction of crop production, expressing sadness that it is mostly children who are suffering from the low production of crops and that they cannot afford to maintain the quality of life.

He stressed therefore that the food aid should be seen from a humanitarian point of view.

“The government of Japan would like to contribute to improving the lives and the food security situation for the people of Lesotho who unfortunately have been experiencing severe drought over the years,” he stated.

In conclusion, Mr. Kawaguchi said Japan appreciates Lesotho`s support in various international fields, adding that the two will continue to grow a relationship closer than ever.

On the same token, WFP Representative and Country Director, Ms. Mary Njoroge said the contribution of canned fish comes at the critical time when WFP is appealing for more resources to respond to increasing needs in the country.

“This food aid will help 180 000 of the most vulnerable, Basotho children, some of whom, the only nutritious meal they receive are provided through the school feeding program,” she added, noting that there is a clear body of evidence which demonstrates that school meals operate as an effective pull factor, drawing the child into classroom.

Similarly, on behalf of the Ministry of Education and Training, the Regional Inspector Central, Mr. Teboho Moneri thanked the Government of Japan for the food contribution which he stressed will not only enhance access to education but will also be an enabling factor towards achieving the Sustainable Development Goals (SDGs).

He said hopefully learners will go to school in numbers, and that the drop-out and repetition rates will be dramatically reduced as learners will be fed nutritious meals.

Over 500,000 Basotho are currently facing food insecurity due to the 2018/19 drought, a situation that will be worsened by the delayed rains as recently stipulated in the Lesotho Meteorological Service (LMS) 2019 outlook. Lesotho is experiencing a late onset of rains coupled with high temperatures and resulting in late planting.