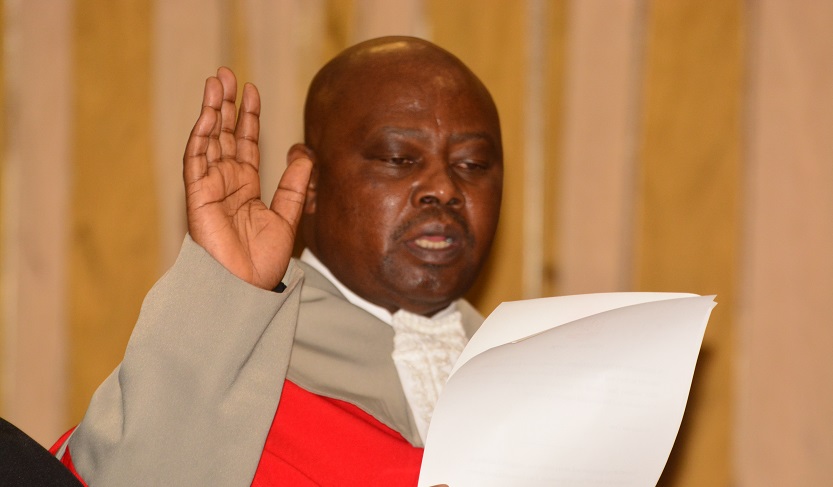 Justice Sakoane Peter Sakoane on Thursday was sworn-in as Chief Justice at the ceremony led by Justice Tšeliso Monaphathi at the Royal Palace in Maseru.

The Christian Council of Lesotho (CCL) led the ceremony with prayer, reading the scripture from Leviticus 19:15 which reads as thus “Do not pervert Justice; do not show partiality to the poor or favouritism to the great but judge your neighbor fairly.”

When taking oath of office, Chief Justice vowed to administer justice to all persons alike without fear, favour or prejudice according to the laws of Lesotho.

In 1987, he joined the Ministry of Law and served as Crown Counsel until 1997. His duties included inter alia provision of legal advice to the government perusal of dockets and giving directives to the police and prosecution of cases in superior courts.

While serving in the Ministry of Law, he enrolled with the University of Sussex in the United Kingdom (UK) for a Master of Laws degree from 1992 to 1993 specialising in Human Rights in International Criminal Law. He joined the Law Reform Commission of Lesotho in 1997 to 2004 as its Counsel and Secretary.

The Chief Justice joined the higher bench in the judicial as acting Judge in June 2014 until July 07, 2016 when the Judicial Service Commission (JSC) recommended his confirmation as a Puisne Judge of the High Court by His Majesty.

He has participated in various professional bodies as a member and this include; The law Society of Lesotho, Lesotho Lawyers for Human Rights, Women and Law In Southern Africa and in 2011, was admitted as an advocate of the High Court of South Africa and became a member of the Free State Bar.