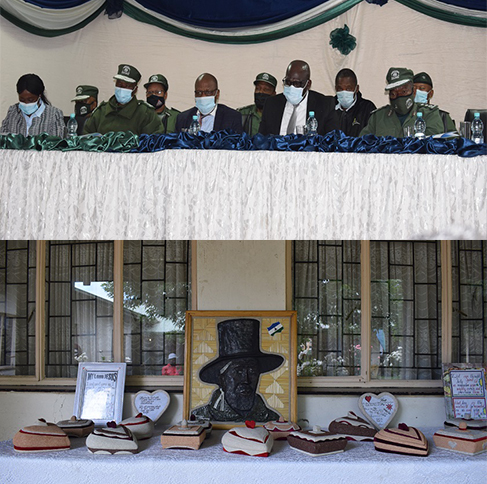 The Lesotho Correctional Service (LCS) in partnership with the United Nations Development Programme (UNDP) launched a Plastic Waste Management Project at the event held in Maseru on Monday.

The project which is under the Female Correctional Institution is aimed at assisting the female inmates to produce products that are made of plastic.

When launching this project, the Minister of Law and Justice, Adv. Lekhetho Rakuoane thanked all stakeholders who made this occasion a success, singling out the UNDP, Ministry of Agriculture and Food Security and the Limkokwing University of Creative Technology.

Adv. Rakuoane said the official start of the plastic recycling project for the female correctional institution could have not been possible without the support of the development partners.

He said in 2005, LCS which is the department under the Ministry of Law and Justice shifted from being the prison service into a correctional service, noting that this shift was meant to introduce a new era, communicating new culture and mindset in regard to practises and norm in modern custodian management.

He further said at the fundamental part of the criminal system, LCS helps offenders to reform and return to their communities as law binding citizens, productive and social accepted members of their communities.

The Minister said he has noticed that this project is for females and staff at the Female Correctional Institution, saying it is his belief that this project will be rolled out to other institutions so that other inmates can also benefit from it and be self-resilience.

He however said the institution is faced with challenges of addressing the special needs of turning the female offender into self-resilience, noting that the main target of LCS is to turn the situation through the introduction forms of rehabilitation and vocational training that include among others plastic recycling projects.

In conclusion, the Minister said this project will not only import much-needed skills but will also promote sustainable right lifestyle among Southern African Customs Union (SACU) members, systems of mitigating global warming, environmental degradation and further changing the interception of correctional institutions.

Also speaking. the UNDP Resident Coordinator and Residents Representative, Ms. Betty Wabunoha said she was pleased to be part of the UNDP- female correctional intuition plastic waste management project being implemented by LCS through the provision of a critical grant to LCS by UNDP.

Ms. Wabunoha said UNDP has partnered with the Ministry of Tourism, Environment and Culture in the fight against the environmental socio and economic impact of plastic waste by implementing a project namely ‘Strengthening Partnership on Sustainable Plastic Life Cycle Management in Lesotho’.

She commended the project, noting that this is an indication that every Basotho will benefit from the project of the fight against plastic waste.

Also speaking, LCS Commissioner, Mr. Mating Nkakala said the project is aimed at transforming the lives of the female inmates by providing them with a diversity of opportunities while rehabilitating them in order to prevent them from committing crime again.

The Commissioner said this initiative will equip the inmates with the skills that they need to survive when they return back to their communities.

In June 2021, the UNDP Lesotho launched Plastic Waste Management with the aim of reducing, recycling and repurposing plastic.