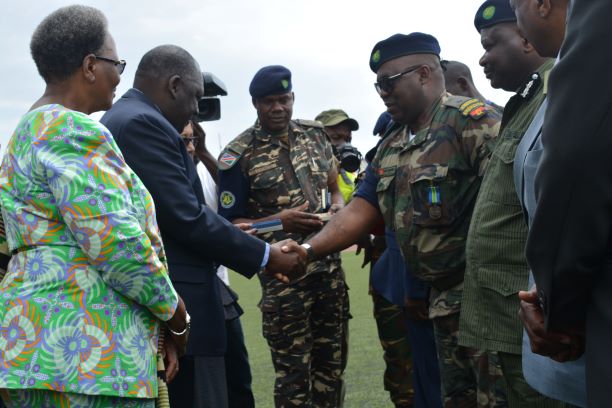 The Prime Minister, Dr Motsoahae Thomas Thabane says the presence of Southern African Development Community (SADC) Preventive Mission in Lesotho (SAPMIL) has brought the needed security and peace in the country. Dr Thabane was speaking at closing ceremony and medal parade for SAPMIL held in Maseru on Tuesday. He said it is through the mission that Lesotho attained security prior to national reforms in the following areas, Security, parliament, judiciary and public service amongst others. “SAPMIL has contributed to transparent reforms that are unshakable and all stakeholders are committed to participate in the national transformation,” he stressed. He expressed appreciation to the SADC family for having deployed the mission in the country, saying the initiative signals its support to member states. Also speaking, Representative of the Chair Organ, Mr. Davies Chama appealed to political leaders in exile to voluntarily return home on November 25 so that national reforms process can start on November 26. Mr. Chama, who is also the Minister of Defence in Zambia said it is through the mission, the spirit of ‘Ubuntu’ was promoted and enhanced.

The SADC Executive Secretary, Dr Stergomena Lawrence-Tax said SADC is obligated to ensure that the region is at peace hence the mission deployment in Lesotho since November 2017. Dr Lawrence-Tax added that the deployment was meant for six months but was extended so as to maintain and consolidate the momentum attained. Amongst others, She pointed out that they have been able to capacitate a total of 400 members of the National Security Forces such as police, army and correctional. She expressed hope that Lesotho will get out of SADC agenda, if they wisely handle issues despite other complexities. In conclusion, the closing ceremony also saw the awarding of medals and certificates to the mission. According to SADC information, the mission was made up of 269 officers, many of whom were soldiers from different countries as well as police and civilians. The deployment of the SADC mission in the country came as result of the killing of the Lseotho Defence Force (LDF) Commander, Lieutenant Khoantle Mots’omots’o who was shot dead in his office by army members. The mission was launched in the country in November 2017.