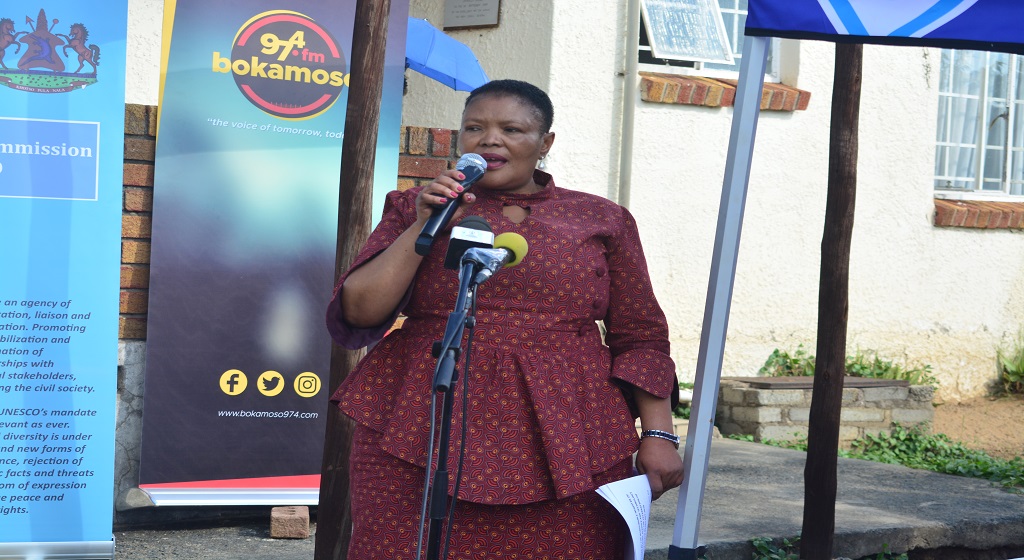 The Principal Secretary of the Ministry of Communications, Science and Technology, Mrs. Mabotle Madamane says commemoration of the World Radio Day comes at the crucial time as Lesotho undergoes media reforms.

Mrs. Damane was speaking on behalf of the Minister of Communications, Science and Technology at the World Radio Day commemoration held at Media Institute of South Africa (MISA) Lesotho in Maseru on Friday.

She said the celebration offers journalist an opportunity to dig deep in their hearts and work towards fulfilling their obligations as critical ingredients of democracy by ensuring that public receives adequate and balanced information.

She urged all media practitioners to provide Basotho with equal access to high range of quality entertainment, information and education, saying every Mosotho should have a broad access to radio station of their choice.

She commented that this year’s theme ‘Radio and Diversity’ connotes all importance of celebrating humanity in all its diversity with key objectives: to advocate for pluralism, to encourage newsroom presentation of social diverse groups, and promote diversity in editorial content.

Mrs. Damane expressed that very few of the local radio station comply to payment of operating licenses while majority don’t comply , saying the non-complying stations will then face shutdown.
She however disclosed that the ministry will issue warning letters before the shutdown.

Again, she said she is concerned about lack of professionalism in handling issues of national interest. Noting that she is s even more consent by some reports broadcasted as such are just opinions, which are targeted to discredit efforts made by government.

According to the Lesotho Communications Authority (LCA) Communications Manager, Mr. Tŝiu Tŝiu there are 27 radio stations operating licenses in the country but only 21 of them are successfully operating.

Meanwhile, the representative of UNESCO, Mrs. Matŝooana Sekokotoana said their mandate is to help Lesotho to implement policies and programs of UNESCO, saying communications is one of them, promotion of cultural diversity, cultural expressions, sensitive expression, popularity of opinions and diversity of broadcasting.

Also speaking was the Chairperson of MISA-Lesotho Chapter, Mr. Boitumelo Koloi who said radio is one of the medium that is advancing hence celebrating the World Radio Day shows our appreciation of its importance.

He therefore appealed to the radio stations Programme Managers to aim for pluralism in their programmes considering various age groups, level of education, location and interests as well as gender issues and other societal preference.

As proclaimed in November 2011, by UNESCO’S 36th General Conference, The world Marks 13th February as a world radio day. This is an observance day held annually to celebrate the existence of radio as medium of Communication and information dissemination.

Radio is a powerful medium for celebrating humanity in all its diversity and constitutes a platform for democratic discourse. At the global level, radio remains the most widely consumed medium. This unique ability to reach out the widest audience means radio can shape a society’s experience of diversity, stand as an arena for all voices to speak out, be represented and heard.