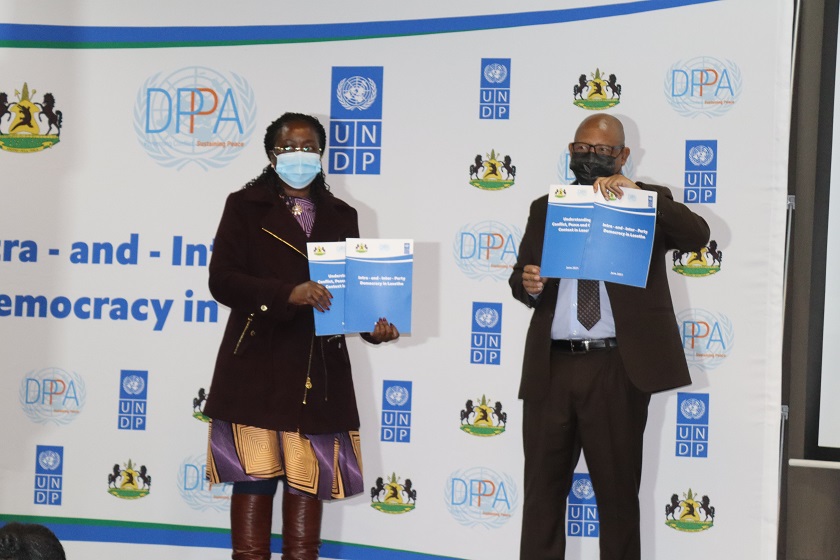 The publications dialogue forum on intra -and inter-party democracy and understanding conflict, peace and gender context in Lesotho was launched in Maseru on Thursday.

Speaking at the Launch the Prime Minister, Dr. Moeketsi Majoro said as the launch of these publications came at the right time as part of national reforms progress and added that the government through the Ministry of Development Planning has collaborated with United Nations in Lesotho on a wide range of policies strategies, programs and progress. He added that the UN and its agencies have over the years supported Lesotho’s development priorities contained in the country development plans.

Dr. Majoro said the National Reform Authority has also collaborated with United Nations Development Program to stir the national reform process towards a successful conclusion hopeful in few months, adding that the government is committed to finalizing the process. He thanked UNDP for its financial and technical support provided to the government to have a realisation of Lesotho that “Basotho want”.

He further mentioned that one of the most valued collaborations between the government and the UNDP is the commission of these two assessments on the intra-and -inter-party democracy and understanding conflict, peace and gender context in Lesotho.

The Prime Minister said the studies are based on interviews and consultations of a wide range of stakeholders in the country, noting that the observations, findings and recommendations show the need to work with political parties, their membership and leadership to attain the stability which will particulate into national stability.

He noted that the national motto should be a clear testimony that indeed Lesotho is a peace-loving nation even though it is often surrounded by conflicts.

Dr. Majoro stressed that this is the moment that the country needs to renew their commitment to return to peaceful and good governance before going to national elections in 2022.

On the same note, the UN Resident Coordinator and UNDP Representative, Ms. Betty Wabunoha said the publications are the contribution to Basotho to broaden their contribution to better understand their issues and challenges in party democracy, conflict, peace and gender context.

Ms. Wabunoha stated that national dialogues are the increasing tools that can provide cooperative resolution and political transformation.

She said even though each dialogue can be used and manipulated by the political leader but she is pleased to announce that Lesotho was able to agree on the mechanism implementations of the dialogue outcomes mechanism, saying the dialogues in Lesotho started in 2018.

She noted as National Reforms Authority Act 2019 became a legally binding plan of action hence this plan of action will ensure that recommendations are implemented through the reforms in terms of the Constitution Amendment, Law, Policies and Administration.

On the other hand, Dr. Victor Shale when outlining the recommendations regarding intra -and inter party democracy said based on assessment finding, there should be a regulatory and intuitional framework which will enact comprehensive political legislation that governs the formation, the management, conduct, funding and de-registration of parties and coalitions hence this should be initiated under the ongoing national reform process.

Dr. Shale also mentioned that there should be an establishment of a statutory body that will exclusively focus on political parties to help create a distinct separation of roles between IEC and the political parties.

The Launch of the intra -and inter party democracy and understanding conflict, peace and gender context in Lesotho publications and dialogue forum was done in partnership with government of Lesotho and UNDP.