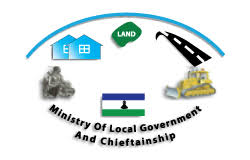 The Minister of Local Government and Chieftainship, Mr. Tsoinyane  Rapapa and his Deputy Minister,  Mr. Moshe Leoma are currently visiting the district councils countrywide to inspect progress made on developmental activities particularly on roads construction projects.

The latest visit was in the Berea district at the Kanana Council on Friday, where a construction of 26 roads including three bridges at the cost of M10.4 million is going on. These roads are being constructed by the district council.

Mr. Rapapa said the purpose of the visit was to learn of the progress, challenges and way forward. He highlighted the financial constraints as the major challenge, which has so far hindered the progress thus defeating the ministry’s commitment in service delivery.

He added the mission is to solicit much needed funds to enable completion of the roads construction not only in the Berea district, but countrywide as all councils are suffering the stagnancy due to financial constraints.

Also described as the challenge was the failure to implement the National Decentralisation Policy, which has been in place since 2014.  The minister said the councillors are echoing the nation’s outcry for implementation of this policy deemed as one the keys for development of Lesotho.

He blamed the failure of implementation of the policy to the political instability, which he said, frustrated the commitment and efforts by the ministry’s technocrats whom he said had done their part including the draft of the local Government bill.

This bill could not see the light as the Parliament was dissolved before it could be passed as the law. Our plan, he said, is to ensure that by December the Local Government bill is enacted as the law. That will enable the both full and effective implementation of the long awaited policy of decentralization.

Meanwhile the Chairperson of the Berea District Council, Mr. Pheta Letsoela applauded the visit of the minister, which he said began with his meeting with all the members of the council on Thursday.

He said the Berea District Council plan was to construct 50 roads within two councils being Kanana in Berea constituency and Makeoane in Mosalemane, adding that the current construction in Kanana council is expected to be completed by September after which they will embark in construction work in Mosalemane.

He however expressed concern over financial constraints and delay in allocation of funds, all which, he said hamper their efforts to accelerate much needed service delivery.

The District Councils are constructing roads with the use of their yellow plant countrywide.