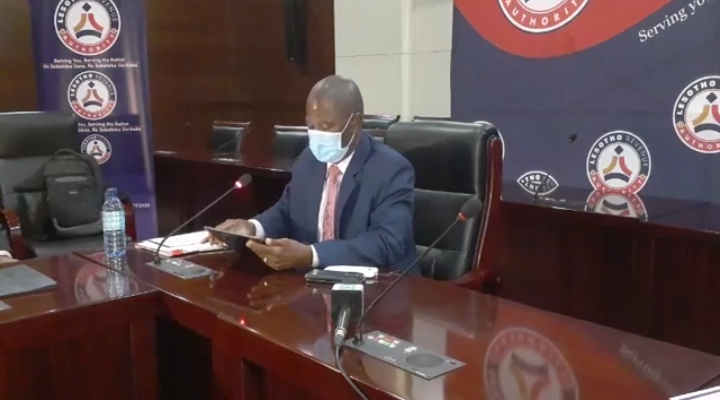 The Minister of Finance, Mr. Thabo Sophonea received a cheque of over M6 billion worth of tax revenue collection by the Lesotho Revenue Authority for the 2020/2021 financial year.

This event took place during a press conference held at the Manthabiseng Convention Centre on Wednesday whereby LRA also revealed its performance during the said year.

Speaking at this event, Mr. Thabo Sophonea applauded the authority for the achieved target despite the challenges the economy of the world faced due to the COVID-19 pandemic.

He said he is also happy to learn that taxpayers have willingly complied with their tax obligations hence commended them for honouring their obligation.

Mr. Sophonea however urged the authority to continue with all the strategies it used to achieve all during the 2020/2021 financial year.

During his presentation, LRA Commissioner General, Mr. Thabo Khasipe said for the previous financial year, the authority was given the mandate to collect over M5 million target which was revised from the initial target of over M7 million but the effects of the COVID-19 which were characterised by several economic disruptions led to the revision.

He noted that amid the tough economic landscape, negatively affecting business operations, the authority was able to collect over M6 billion which led to registering a 13 percent surplus.

Mr. Khasipe said the authority was therefore, able to collect over M7 million above target for the 2020/2021 financial year in which the tertiary sector which is made mostly from service providers contributed largely to the collection.

He added that the authority has also introduced a new strategy ‘Rea Aha, 2.0’ which during its implementation is aimed at improving revenue, improving quality of services, automatic compliance and reduced cost of collection.

At this event, the Minister of Finance also launched the Lesotho Revenue Authority Tax Return Filing Season which is expected to end on June 30.