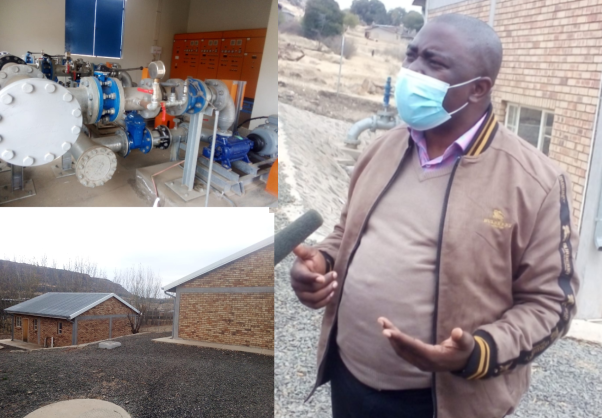 The Government of Lesotho has spent M126 Million on Tsikoane Water Supply and Sanitation Project to address water shortage at Tsikoane and nearby villages in the Leribe district.

In his remarks during his site visit in Leribe, the Minister of Development Planning, Mr. Mochoboroane said it is a risk not to follow up projects to determine if the community has benefitted from them.

“The government used M126 Million to address the needs of the communities, but such initiatives failed to respond to problems facing them,” the stressed, noting that government resources cannot be used and yet not benefit the country.

The Minister’s response follows the realisation that there has been a confusion between Water and Sewerage Company (WASCO) and Rural and Village Water Supply which led to the failure of the project hence he resolved to meet with relevant Ministries to address this issue.

Meanwhile, Desk Officer for the Ministry of Water in the Department of Project Cycle Management (PCM), Ms. ’Matsatsinyana Mating said the water was sourced from Hlotse River to Sebothoane Mountain, noting however that the study was not enough to verify if the supply will be sufficient for both Hlotse and Tsikoane villagers.

Mr. Tsietsi Motleleng, who is a plumber said the project is complete, but the pump station is small to supply water to the tank hence the villagers, however noting that these can be solved by WASCO and Rural and Village Water Supply.

On the other hand, one of the villagers, Mrs. ’Malijeng Tlebere revealed that the project site belongs to her sister and since its inauguration, the villagers were not compensated.

“Since the completion of the project in 2011, there is still no water and we have waiting,” said Mrs. Tlebere, saying the villagers get water from community pump and sometimes buy from other people.