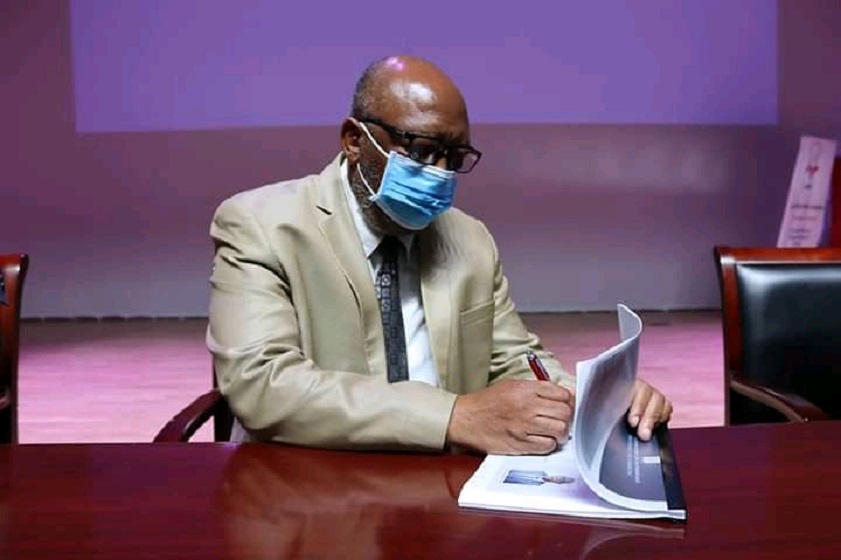 The Minister of Communications, Science and Technology, Chief Thesele Maseribane on Monday launched a three-year ministerial strategic plan at the event held at Manthabiseng Convention Centre.

Speaking at the launch, Chief Maseribane said digital technology has been an essential tool when responding to the worldwide pandemic, saying that the pandemic has stressed the importance of the digital economy, science research, and innovation.

He added that it has also emphasized the inequalities that exist in universal service and access while underscoring the need for the country to build economies that are more inclusive.

The Minister further noted that the world is undergoing a technological revolution in satellite as the fourth industrial revolution which is characterised by connectedness changing the way society lives.

Chief Maseribane said the Ministry of Communications, Science and Technology’s mandate is to promote innovation and the use of technology with the aim of creating employment, saying his ministry is transforming the working environment within the government from an existing manual system to a digitalised environment.

He noted that his ministry has provided the parliamentarians with gadgets that will assist them to access documents electronically, mentioning that by 2021 the ministry aims to implement paperless government initiatives in phases.

Chief Maseribane said the Ministry of Communications, Science and Technology is collaborating with the United Nation Development Plan (UNDP) to ensure that the policies that were represented under the media forum in the National Reforms dialogue will be finalised by March 2021, adding that the Planning Section will be liable to formulate the operational plan that will emanate from the strategic plan.

Moreover, the minister said through the strategic plan, the ministry is planning to introduce the “Les24” news channel that will be accessible online anytime, anywhere where they will establish a public information management system.

He further mentioned that both Radio Lesotho and the Ultimate will stream online by the end of this year.

In conclusion, the minister said the ministry has bought an Outside Broadcast Van (OB VAN) as a commitment to broadcast live countrywide, saying TV OB Van will be ready by end of January.

According to the minister, the African Union has completed a comprehensive digital transformation strategy that is in line with AU Agenda 2063 and the AU digital strategy has established a vision for an integrated, inclusive and digital economy for Africa.

“Lesotho should benefit from all strategic partners namely; United Nations, Commonwealth, African Union and the European Union,” he said, commenting that the Government of Lesotho should also be a member of the Smart Africa Initiative.

He added that Lesotho must be part of the digital, science, technology and innovation revolution so to build new businesses and develop our digital eco-systems.