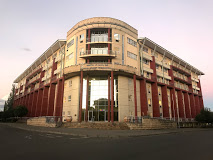 The Ministry of Health cannot readily estimate in monetary terms the extent of the damage caused by fire that gutted the Finance and Planning offices in the early Wednesday morning.

The Minister of Health, Mr. Nkaku Kabi said this on Thursday when addressing the media at the press briefing intended to inform the public about the fire incident that affected the ministry’s headquarters building on Wednesday.

Mr. Kabi confirmed that the two offices of finance and planning in the ministry have been burned to ashes while the neighbouring ones only suffered the effects of smoke.

It was at the same briefing that the Acting Director-Finance, Mr. Mpheteng Ts’ukulu also confirmed that the fire started in his office, which he said is on the first floor of the building adjacent to the Planning office.

He noted that having served in this office for five years, there were only filing cabinets holding various reports related to parliament and partners, therefore allayed fears to all saying his office does not deal with the actual transacting processes, hence all payment records were not physically in the burnt office and that since they use the Integrated Finance Management Information System (IFMIS), files and information can be retrieved easily from the system.

Also speaking, the Principal Secretary (PS) in the Ministry of Health, Mr. Lefu Manyokole said though the cause of fire is not known yet, there seems to have been an electric device that could have caused the fire, saying it is advisable to switch off electric appliances when knocking off from work.

Mr. Manyokole said they have no reason to believe there was any malicious desire for the fire, however noting that there is nothing that can be hidden as they do not rule out anything and will allow investigations to ensue and the law to take its course.

The construction of the Ministry of Health headquarters building which was under the Public Private Partnership (PPP) agreement was completed in 2006.