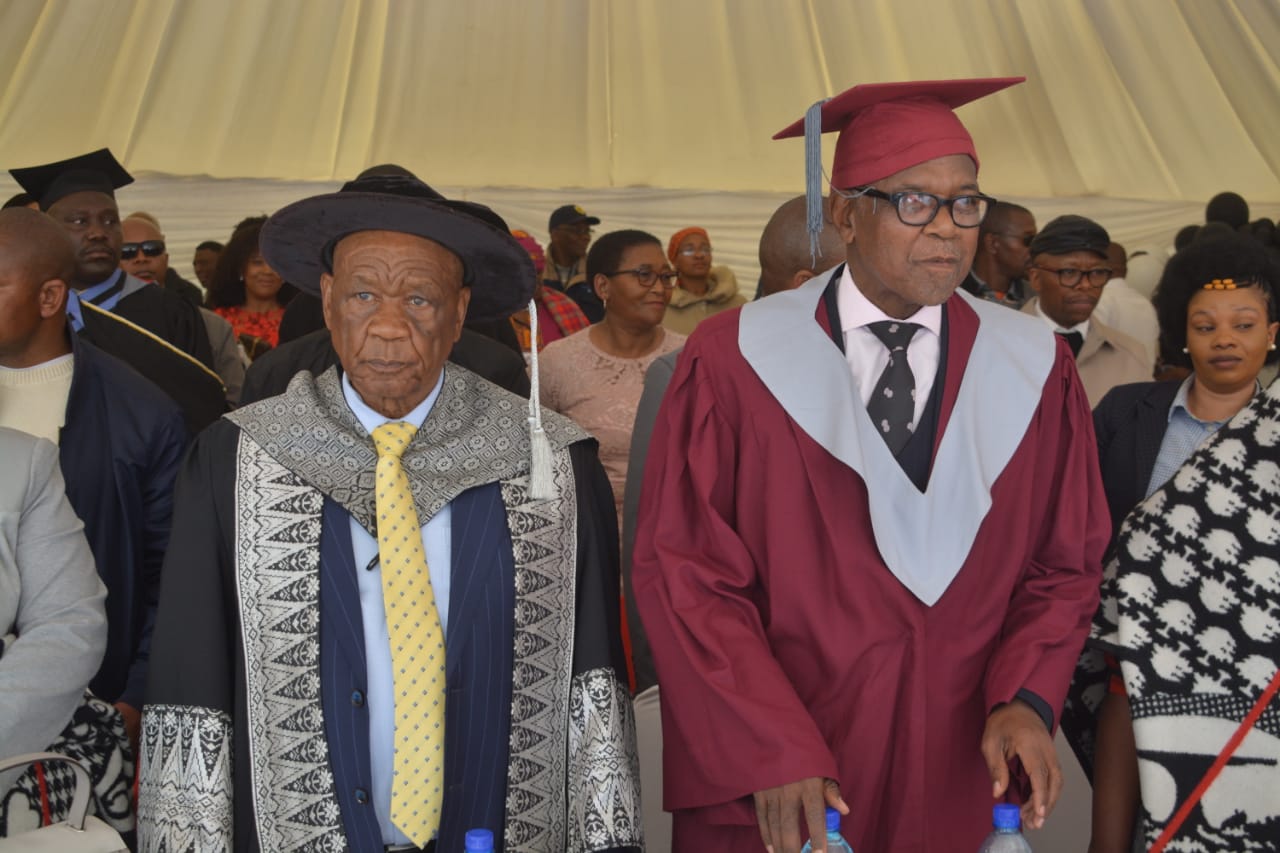 Basotho from all corners of the country descended at Molengoane with huge numbers to celebrate with the Member of Parliament for Machache constituency N0. 39 Dr Monyane Moleleki for having been conferred with the honorary doctorate by the Geneva School of Diplomacy and International Relations.

Dr Moleleki was conferred with honorary doctorate for being a philanthropist by being the longest serving minister since the return of democracy, building national unity and lastly building a home for orphaned children in his constituency which he fully sponsors out of his own pocket.

Expressing his vote of thanks and appreciation to the honorary doctorate conferment, Dr Moleleki described that there are three categories of doctors which are medical, academic and the honorary, which his falls under.

He said the honorary doctorate is conferred to people who have served the nation well that after being alerted of such outstanding people universities make their own investigations to find out if really what they have been told is true.

Dr Moleleki make an example of himself, saying Ambassador Refiloe Litjobo who serves at the Lesotho embassy in Switzerland is the one who recommended him to the university, adding that in turn, the Geneva School of Diplomacy and International Relations sent its own researchers and discovered he really deserves to be awarded the honorary doctorate.

He therefore said it was befitting to come and celebrate with his own constituency because they form part of his contribution to the nation building.

As part of the celebrations, Dr Moleleki handed over books to the Machache Primary Schools, saying the students will learn national anthems as well as the African Union (AU) anthem.

During his congratulatory remarks, Prime Minister Dr Motsoahae Thabane commended Dr Moleleki for being recognised for his selfless contribution to nation building and his long political journey.

He added that Dr Moleleki has contributed immensely to the development of his constituency hence why he has won the hearts of the people who has elected him every election.

Principal Chief of Thaba Bosiu, Chief Khoabane Theko described Dr Moleleki  as a politican veteran who has served the country with distinction and therefore expressed his dismay that his achievements could be noticed by international community and not Basotho themselves.

“He is a real political veteran who has selflessly served the country with distinction and  commitment,” he commended.

Chairperson of the Machache constituency Mr. Tlali Mosola stated that Dr. Moleleki has left milestones as a minister in different ministries by ensuring the growth of the media when he was minister of Information, and provision of water and sanitation when he held the post of minister of natural resources.

He said it is therefore not surprising that the person of this calibre has been recognised with this award.

Dr Moleleki schooled at Nazareth Primary from 1957 to 1965 and Christ the King high Schools from 1966 to 1970. He furthered his studies at Thomposon Foundation (United Kingdom) and obtained Diploma in Journalism and Broadcasting.

Graduated from Moscow State University (Russia) with Certificate and Master of Arts Degree in Mass Communication in 1982.

He also holds Certificate in Television Broadcasting from the university Witwatersrand in 1982. Dr Moleleki worked as an Extension Educator (Lecturer) at the National University of Lesotho and Public Relations Manager at the Lesotho Highlands Development Authority, (LHDA).

In 1993 he was elected member of parliament for then Senqunyane constituency, and subsequently appointed the Minister of Natural Resources from 1993 to 1994. After a short stint as back bencher he was appointed back into the cabinet in the Ministry of Information and Broadcasting from 1996 to 1998.

He was re-elected to the National Assembly in 1998 for the Machache constituency. He then served in the Ministry of Natural Resources again from 1998 to 2002, after which he became the Minister of Foreign Affairs.

After 2007 election he served as Minister of Natural Resources again from2007 to 2012, in 2012 he was elected Deputy Leader of Democratic Congress (DC). This time around he was elected Leader of Opposition from 2012 to 2014, After the 2015 elections he was appointed Minister of Police and Public Safety till November 2016.

In November, 2016 he resigned from his position as Minister of Police and Public Safety and launched his own party, the Alliance of Democrats (AD). After 2017 election he was appointed deputy prime minister and minister for parliamentary affairs.