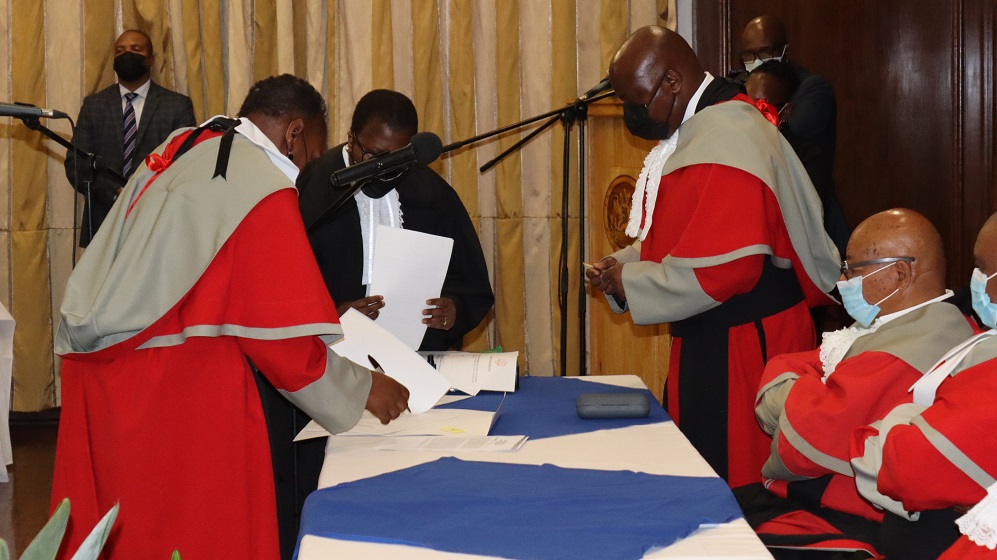 The two newly recruited judges of the High Court, her Ladyship Fumane Malebona Khabo and his Lordship Realeboha Mathaba judges took oath as judges at the swearing-in ceremony held at the Royal Palace in Maseru on Wednesday

The two judges undertook to administer justice to all persons alike without fear, favour or prejudice and in accordance with the Constitution, the laws and customs of Lesotho.

The ceremony which was presided by Justice Tšeliso Monaphathi was graced by the presence of His Majesty King Letsie III, the Prime Minister, Dr Moeketsi Majoro, Chief Justice Sakoane Sakoane and the High Court judges.

Justice Khabo was born on the 18th March 1961 in the Mafeteng district. She is an admitted advocate of the High Court and also a specialist in Labour Law, Labour Law and Alternative Dispute Resolution (ADR) mechanisms. She previously served as legal officer in some of the government ministries as well as Registrar of the Labour Court and President of the same court, to mention a few.

Justice Mathaba also an admitted advocate of the High Court has experience in among others, senior roles of increasing complexity and responsibility in tax administration, water sector, legal practice, prosecution as well as drafting of Bills, complex financing and subsidiary agreements. He previously served in some of the senior positions within the Lesotho Revenue Authority and Water and Sewage Company (WASCO).