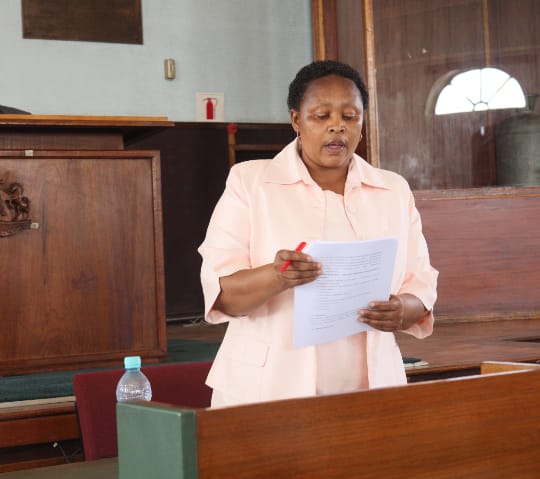 The Central Bank of Lesotho will be responsible for formulating, adopting, executing monetary policy, issuing currency as well as maintaining financial and price stability.

This was said by the Chairperson of the National Reform Authority (NRA) Economic Committee, Mrs. ‘Mmmako Mohale –Lerata when tabling the report before the NRA on its 16th meeting which proposes that CBL must be included in the constitution.

Mrs. Mohale –Lerata said the new proposed structure will enable the Central bank to be responsible for enabling payments clearing settlements, conducting supervision and regulation of financial or related institutions.

The report as she present states that most central banks in the Southern African Development Community (SADC) region operates under constitutional law in their respective countries hence they recommended the same for CBL.

“The established central Bank will be body-cooperating, having a perpetual succession, common zeal and being capable of suing and be sued in its name which will be independent and self-directed,” she said, adding that CBL will be a national bank for banks and government.

It further shows that the new structure proposes that the board will also be responsible for policy and general administration of the affairs and business of the bank.

According to Mrs. Mohale –Lerata, the proposed board will include the Governor who will be the chairperson, two Deputy Governors and non-executive board members who will be appointed by the Parliament on merits and transparency also ensuring possession of relevant professional qualifications.

The board will serve a three-year term renewable once upon satisfactory performance.

“The Governor and the Deputy Governors will be individuals with profound professional qualifications, experience and have leadership skills will serve no longer than eight years,” the report states.

Meanwhile, supporting Mrs. Mohale-Lerata’s presentation, a member of the Economic Committee, Mr. Sebehela Selepe also said instability in the microeconomic sphere in the country has forced the committee to propose that CBL should be included in the constitution.

He said the inclusion of the CBL in the constitution is important as it will enable development partners to lend Lesotho money because CBL will be able to maintain these monies also ensuring that there is no misuse of the funds.

Commenting on the report, the Economy Expert, Dr Mothae Rabuping said CBL should operate like other international central banks to have a transparency system in its operations.

Dr Rabuping said the recommendations of the report will help CBL to meet the international standard and regulate appropriately with good policies implemented.

The Central Bank of Lesotho was established in 1978 as the Lesotho Monetary Authority and started its operations in 1980 but it was later changed to CBL through the Parliamentary Act.