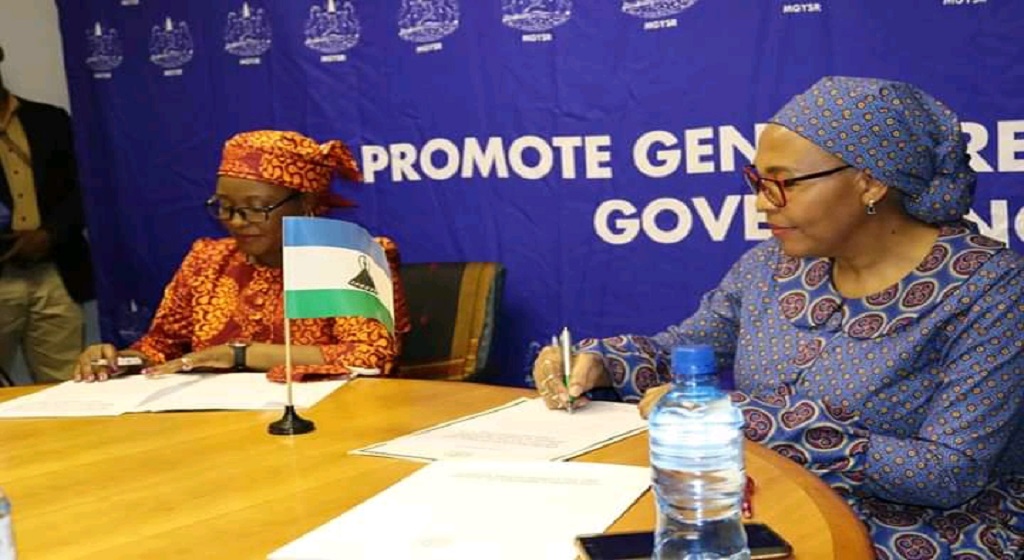 The Office of the First Lady together with the Ministry of Gender, Youth, Sports and Recreational has signed of Memorandum of Understanding (MoU) on partnership to fight against Gender Based Violence (GBV) in the country,

This was announced at the press briefing held on Wednesday in Maseru.

When addressing the media, the First Lady, Mrs. Masekoalane Majoro said statistics show that abuse against GBV in the country has escalated hence pressed her office to collaborate with the Ministry of Gender, Youth, Sports and Recreation to combat GBV.

Mrs. Majoro stated that due to some cultural stereotypes, the country experience high rates of GBV among women which lead to marital suicidal, commenting these cultural believes and practices are the root cause of abuse as they do not allow women to make independent choices.

She singled out upbringing of a girl child in the society which she said contributes much in child abuse where girls are burdened with domestic duties with the aim to prepare them for marriage.

She noted that factors such as cyber bullying and economy also contribute to high statistics of GBV as women mostly suffer physical abuse from their spouses.

Also speaking was the Minister of Gender and Youth, Sports and Recreation, Mrs. Likeleli Tampane said the government has been concerned about the high escalating rate of GBV in the country, saying for the past few months, there have been reports of woman being murdered and raped across the country and yet some of the perpetrators have not been arrested.

Mrs. Tampane said with this collaboration, the ministry hope that it will strive to achieve a country free of GBV.

The MoU aims at ending all forms of discrimination against women and girls and also working together on GBV in the country.