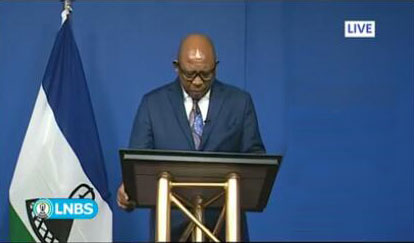 The Prime Minister, Dr Moeketsi Majoro announced that some of the lockdown restrictions will be relaxed starting from Monday, August 23, 2020.

Dr Majoro was addressing the nation on Lesotho Television (LTV) on Thursday evening.

The eased restrictions follow the country’s move from COVID-19 colour Orange to Purple due to reduced reproduction rate from 2.04 percent from last month presentation to 1.27 percent as per NACOSEC and Ministry of Health experts.

According to Dr Majoro, the relaxed restriction will allow opening of schools for senior classes thus Standard 7, Junior Certificate (J.C) and LGCSE beginning of September and churches will also be opened on condition to comply with World health Organisation (WHO) and government protocols as well as to observe maximum of 50 people when in doors and 100 in the open.

He added that liquor stores will also be opened but on conditions which include selling take-aways only and operate from 0900 hours to 1900 hours from Monday to Friday. Again, restaurants will also start operations but selling only take-aways from 0800 hours to 2000 hours.  Public transport will operate at full capacity but still to observe WHO protocols. Beauty Salons will also start operating but customers should come on appointments to avoid overcrowding.

In conclusion the Prime Minister thanked Basotho for their compliance and cooperation during the restriction, saying Lesotho is on Purple colour which allows them to start operating to avoid hunger, urging all to work together with government to ensure safety of all.

Meanwhile, the report released by the Ministry of Health shows that 13, 330 specimens have been tested with 648 new tests and 19 new cases which add up to 1,015 positive cases while recoveries and deaths remain at 472 and 30 respectively.