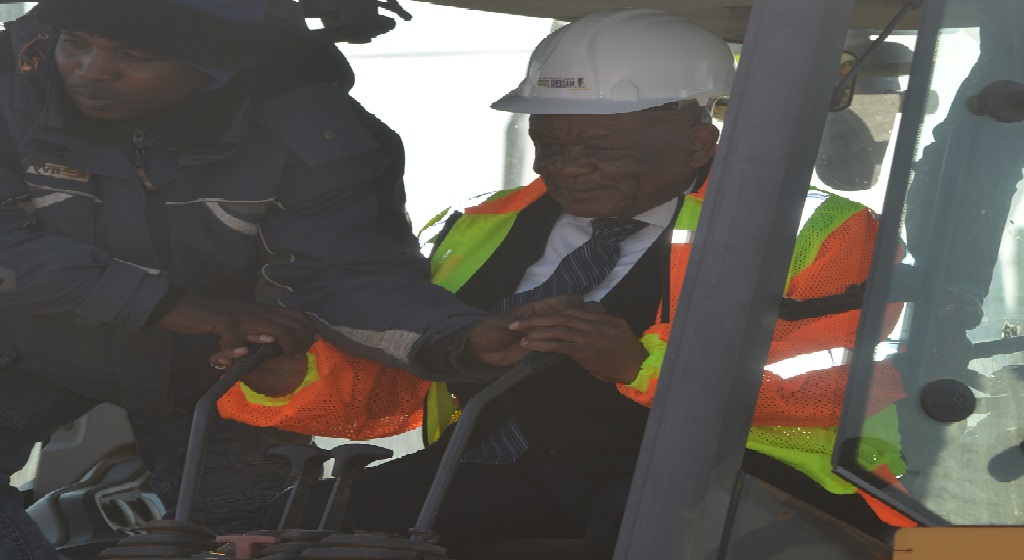 The Prime Minister, Dr Motsoahae Thomas Thabane on Thursday officiated inauguration of the construction of a new Stadium and Indoor Sports Arena at the ceremony held at Ha Ts’iu in Maseru.

The new Stadium and Indoor Sports arena will be constructed at Lepereng, Lithabaneng in Maseru.

Speaking at the ceremony, the Prime Minister said when complete, the stadium will comprise a seating capacity of 40,000, saying at first only 20, 000 will be constructed and that it will have a track while the indoor sports arena will accommodate 3000 spectators and cater for different indoor sporting codes such as Basketball, Netball and Volleyball among others.

Dr Thabane said the project’s cost is estimated to M2.4 billion including the athletes village also to be constructed at National University of Lesotho (NUL) Roma campus. He said this village will later serve as students’ residence at the university.

He added that these facilities will be used for the forth coming African Union Sports Council (AUSC) Region 5, Maseru 2020 Youth Games to be hosted in the country in December next year (2020).

The Prime Minister said during the construction, the project will generate both temporary and permanent job opportunities for Basotho youth, saying they are going to remain as landmarks even for the next generations.

He urged that contractors to be appointed for the construction of this sporting facility should be appointed based on merits and not corruption, noting that local companies should also be considered as sub-contractors so to promote skills transfer for locals.

The Prime Minister said the sporting facilities will help to develop sports and enhance performance so that Lesotho could perform well during international sporting events.

Also speaking. The Chairperson of the Cabinet Sub Committee. Chief Thesele Maseribane reminded Basotho of the journey they have travelled, saying the late former Minister of Gender and Youth, Sports and Recreation, Mr. Kabelo Mafura is the one who signed on behalf of Lesotho for the country to host the games.

He therefore made a recommendation that in his honour one of the facilities be named after Mr. Mafura.

Chief ‘Maseribane also related the good work that has been undertaken by the committee, saying the success and failure of the AUSC Region 5 Maseru 2020 depend on all government ministries cooperation.

He mentioned that even the private sector has been roped in to assist with expertise and finance while the Lesotho National Olympic Committee (LNOC) as well as the Lesotho Sports and Recreation Commission (LSRC) have been entrusted for the talent identification, selection and preparation of the team Lesotho.

Dr Phamotse expressed believe that this sporting facility will address such challenges .

She mentioned that the Prime Minister will at the later stage be invited for sod turning as part of inaugurating the construction of the athletes village at NUL, which will later serve as students residences.