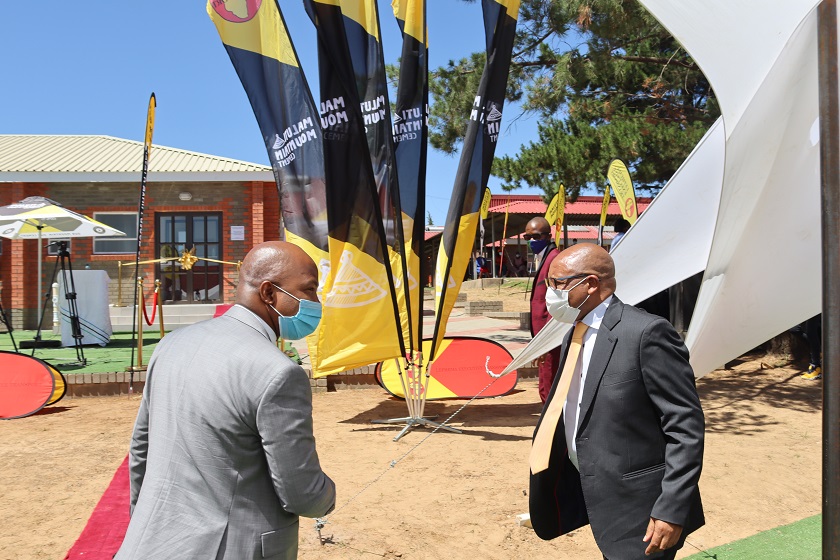 Speaking at the event, Dr Majoro expressed his gratitude to Executive Transport for the good work, saying Mr. Lebona Lephema pledged to donate a laboratory to help the country fight the spread of COVID-19, saying this came in March when the virus was declared an outbreak.

He expressed his gratitude to local businesses, commenting that he is impressed by private sector dedication in supporting the government and helping Basotho.

He remarked that this is not the first time Mr. Lephema offers a helping hand to the government in fighting COVID – 19 thus expressing hope that it is not the last time.

He thanked the Minister of Health, Mr. Motlatsi Maqelepo for his commitment, saying his ministry is one of the challenging ministries to run, hence encouraged him to work hard so that Basotho have full knowledge on COVID-19.

Also speaking, Mr Maqelopo thanked Mr. Lephema together with his associate Mr. Sam Matekane for working hand in hand with the government in making this project a success.

He therefore promised that going forward, government and private sector will work together in ensuring the safety of Basotho.

He stressed that COVID-19 is not only a health crisis but also a national crisis therefore needs collated effort to overcome it.

He said it is the government responsibility to help private sectors grow their business as they are doing a great job of giving back to the community, noting that this lab will go a long way in helping Basotho.

He warned Basotho that COVID-19 is not over yet hence should always follow health precautions, saying recently, 47 suspects of Corona virus were tested and 43 of them tested positive.

Mr Maqelepo said he is overwhelmed by the support that many Basotho Entrepreneurs give to the Ministry of Health to fight the spread of COVID-19.

When handing over the lab, the Chief Executive Officer of Excercutive Transport, Mr Lebona Lephema said building this lab was not an easy journey, he therefore thanked his team for working tirelessly in making this project a success.

He said when the coronavirus was declared an outbreak, they had several meetings with the Minister of Health on how they could help the government to fight this pandemic hence the laboratory and mobile clinics.

Mr. Lephema noted that initially the two mobile clinics were intended to run the test but unfortunately, they were not appropriate for running the test therefore developed the idea of building the lab for Teyateyaneng community, saying charity begins at home.

He stressed that health facilities need people who work together in order to overcome Corona Virus.

He therefore thanked the Prime Minister and Minister of Health for giving him this opportunity to give back to community.

Present to grace the event were the Christian Council of Lesotho (CCL) which led the prayer session, Principal Chief of Ha ‘Mamathe, Chief Sempe Khabasheane Masupha, public servants and the general public.