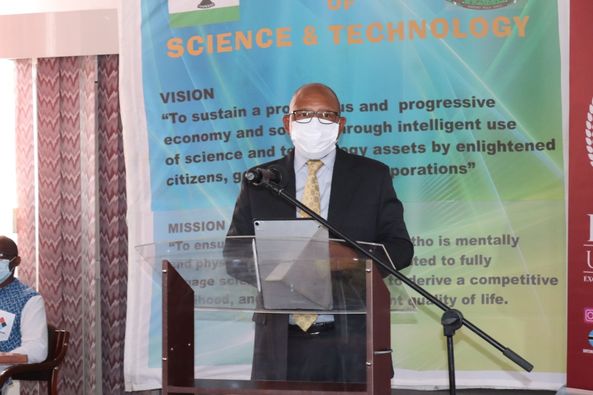 The Prime Minister, Dr Moeketsi Majoro officially launched the Lesotho Academy of Science and Technology (LAST) at the event held in Maseru on Monday.

Speaking at the event, Dr Majoro  said the launch comes at a time when Lesotho and many countries around the world have been hit hard by COVID-19, saying this is a testament to the fact that science should play a critical role in evidence-based policymaking during pandemics and beyond, hence the role of science cannot be overemphasized.

He said he was informed that plans to create this academy started way back in 2017, while the idea of launching academics of sciences was discussed and approved by Southern African Development Community (SADC) Ministers responsible for Science and Technology.

The Prime Minister remarked that science, technology and innovation are our present and future, adding that working with organized scientists in an academy of science is a way to go in this modern world than work with individual scientists.

He noted that this academia is going to adjudicate over disputes amongst academia, in particular, the local scientists and therefore pledged government’s support to the academy in its autonomy.

Dr Majoro urged companies and individuals to support the development of LAST whether financially or through in-kind support saying he wants to see LAST growing from strength to strength.

He said LAST is expected to be a key institution in Lesotho’s national system of innovation and will serve to strengthen science, technology, and innovation capacity.

Also speaking, the Minister of Science and Technology, Mr. Keketso Sello expressed gratitude to the country’s champions for leading the establishment of the LAST, the United Nations Technology Bank for Least Developed Countries (UNTBLDC), and the Network of African Science Academics (NASAC) for the technical and financial support offered to make Lesotho’s dream a reality.

He said to improve the limping socio-economic development, Lesotho needs to prioritise and invest in research and development.

He stressed that the government, they hope LAST will work closely with other relevant and Similar intuitions nationally, regionally and globally in order to share mentorship and knowledge transfer.

The UN Technology Bank is a UN entity that is dedicated to enhancing the contribution of science, technology and innovation for sustainable development in the world’s least developed countries views Academies of Science as a critical part of its mission statement.

The National University of Lesotho and Botho University were part of this great initiative.