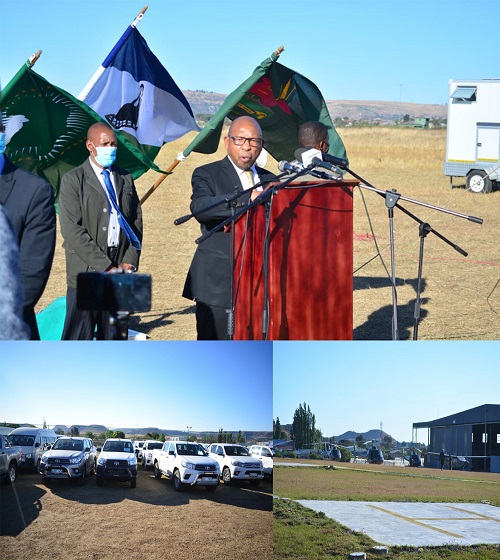 During the launch, Dr Majoro handed over 31 vehicles and 3 Helicopters which are intended to help the established task force that comprises members of the Lesotho Defence Force (LDF), Lesotho Mounted Police Service (LMPS) and National Security Service (NSS) to fight crime in the country.

Speaking at the event, the Prime Minister expressed his concern over the alarming rate of crime in the country, which he said must be dealt with urgently.

Dr Majoro said the escalating crime rate contributes towards the decline of the economy, saying Basotho have deviated from being a peaceful, loving and harmonious living nation.

He therefore appealed to Basotho as a nation to work together with the task force to fight this crime, adding that the government of Lesotho has taken charge to ensure that perpetrators are charged accordingly hence why the law concerning bail will be reviewed.

He described the handing over of these resources that will enhance the fight against crime as a response to public outcry over criminal activities in the country.

He said he is proud to announce that Operation Restore Hope will work toward zero crime tolerance in the country.

Dr Majoro said though the Operation Restore Hope is only officially launched, it has been operating and the task force has made arrests, singling out the Koalabata, Maputsoe and Qeme crime saga, adding suspects in this regard are in police custody while there are ongoing investigations regarding Leribe killings.

Operation Restore Hope has been established to strengthen the fight against crime in the country.