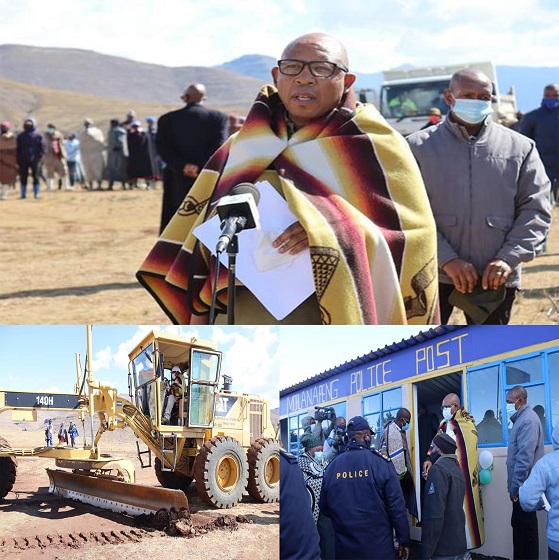 The Prime Minister, Dr Moeketsi Majoro officially led the sod turning of the construction of a 26 kilometers road from Ha Ramatseliso to Matsaile on Friday.

Speaking at the occasion, the Prime Minister said completion of the road is expected after three years due to shortage of machinery, however, promised to consider possibilities of completing this road before the general elections in 2022.

He added that about 200 people will be employed in this project, stressing the importance of giving jobs to local residents in the areas, especially for unskilled labour.

Dr Majoro applauded the Member of Parliament for Thaba Tseka Constituency, Mrs. Mamoipone Senauoane for standing her ground when requesting services, saying the road at Matsaile will improve service delivery in the area.

He said the government is planning to construct the road that connects to Sehong-hong as well as building bridges in the area.

Also speaking, the Minister of Local Government and Chieftainship, Mr. Ts’unyane Rapapa expressed his gratitude that this government has responded to the community’s grievance of many years.

Mr. Rapapa expressed his hope that residents in these areas will protect this development, also noting that plans are underway to also construct a road at Mashai.

A Member of Parliament for Thaba Tseka Constituency commended the government for responding to their request for a road as this will end the long-suffering of communities from Matsaile who traveled long hours to cash buses at Ha-Lelingoana and Ramats’eliso so to access services in  Thaba-Tseka town.

Mrs. Senauoane stressed that this area was neglected for a long time and sometimes residents were forced to leave their homes as early as 03:00 in the morning or seek accommodation from Ha- Ramats’eliso residents when needed to go to town to access services, commenting that this will be history when this road is completed.

Meanwhile, on the same date, Prime Minister, Dr Majoro officially opened the Mohlanapeng Police Post where he urged the police to be deployed at the post to work hard to restore public trust which for many reasons have been lost.

He said it is the government’s responsibility to provide services needed by the public however saying most of the time lack of funds becomes a hindrance to achieving this mandate.

At the same event, the Mohlanapeng Lesotho Evangelical Church presented a Bible as a token of appreciation to the Prime Minister.