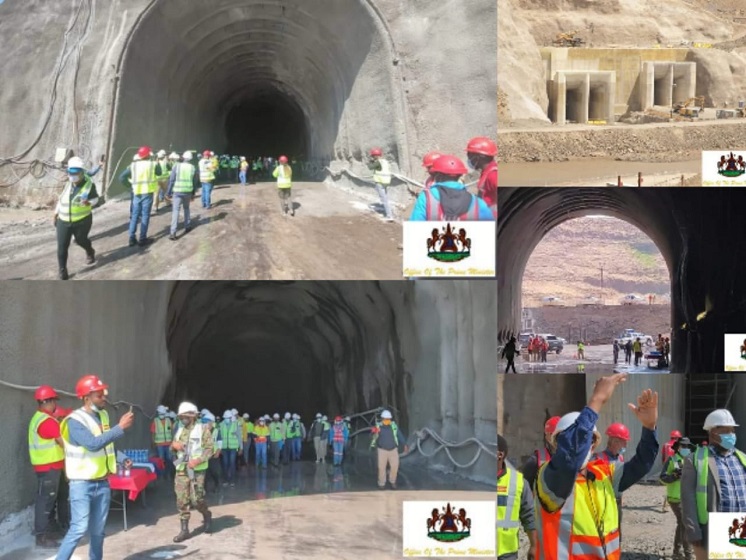 The construction of Polihali Dam is expected to be completed in 2028, the Polihali Operations Manager, Mr. Gerard Mokone has said when briefing the Prime Minister during the tour of the project site in the district on Thursday.

Dr Moeketsi Majoro and his delegation that included some cabinet Ministers toured the Polihali Dam site where he had the opportunity to walk through the water diversion tunnel among others.

The purpose of the visit was to be briefed on progress made so far since the preliminary works at the dam site started.

During the tour, Mr. Mokone explained that over 4000 people who include skilled, unskilled and semi-skilled workers have been recruited for the preliminary works.

He said unskilled labourers recruited from the surrounding communities rotate after 18 months.

He further said communities from five villages to be covered by the dam will be re-settled while institutions like schools and Lesotho Correctional Service in the district will also be re-built.

He mentioned that the dam will be filled with water collected from the rivers of Senqu, Khubelu, Sehong-hong, Mokhotlong and Moremoholo.

At the end of the tour that was interactive, the PM urged all stakeholders involved in the project to ensure that it is completed according to its schedule for the development of Lesotho.

The PM was accompanied by some cabinet ministers, LHDA Chief Executive and Principal Chiefs of Mokhotlong and Malingoaneng.