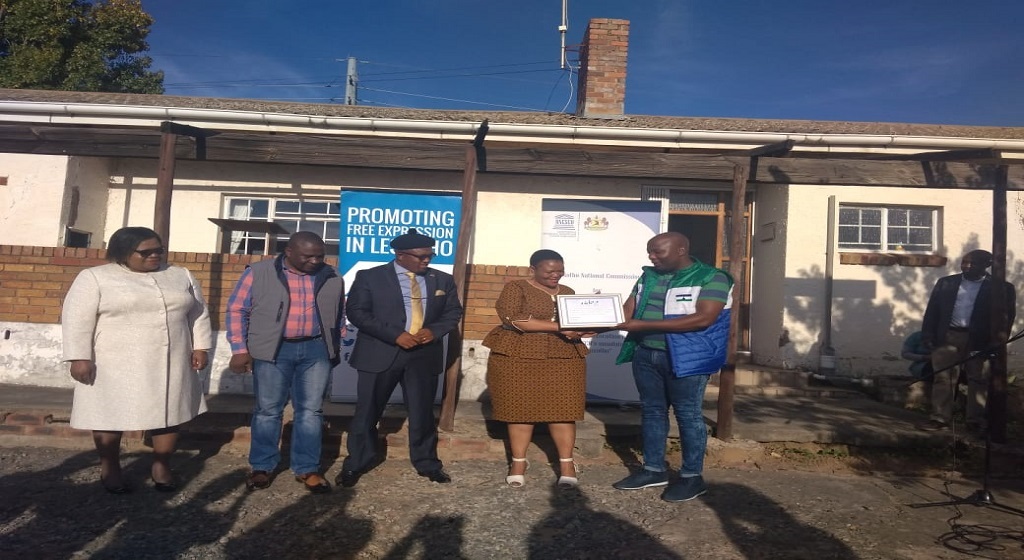 The Principal Secretary of the Ministry of Communications, Science and Technology, Ms. ‘Mabotle Damane has urged the media to practice responsible journalism to avoid amongst others reporting of fake news.

This, Ms. Damane said on Friday during the 26th celebration of World Press Freedom Day held in Maseru under the theme, “Media for democracy: journalism and elections in times of disinformation” which also saw awarding of certificate of appreciation by Media Institute of Southern Africa (MISA) Lesotho to the Public Accounts Committee (PAC).

She said it is no secret that news reporting by some of the media practitioners compromises journalism ethics and professionalism, saying no instability should ever be attributed to the functions of the media.

She commented that freedom of expression should be in line with responsibility, saying media content should reflect the Lesotho that invests much on development and socio-economic growth.

The Principal Secretary commented that this year’s theme comes at a very important time amidst the national reforms process which she said are geared towards creating a Lesotho that all want, saying these reforms signify the beginning of a new journey for every Mosotho.

Ms. Damane added that most importantly, the reforms afford media fraternity time for introspection thus to re-think their role in the society and on how best they can contribute to their democracy, stressing that it is important to remember that the most significant role of media in democracy is the interpretation and coverage of political information especially during elections.

“For efficient coverage however, the starting point is for us to review regulation as it is only through regulatory frameworks that we can be governed and protected. The issue of media regulation should thus top the agenda of all debates and discussions”, she added.

She remarked that regulation not only promotes freedom of expression as enshrined in section 14 of the constitution but also paves way towards a free, independent and pluralistic media as envisaged by the Windhoek declaration that was adopted in 1991. She therefore, expressed hope that all are sincerely participating in the reforms so that together they can develop new laws and policies that are in line with international best practices.

She therefore  remarked that it is now time to begin discussions around the establishment of a Press Council, that will regulate print and online media platforms which she said have until now remained unregulated, adding that the Communications Act which governs the Broadcasting sector also needs to be reviewed.

Ms. Damane  therefore urged all to put their minds on ensuring that outdated laws are removed, citing the Criminal Defamation Act of 1969, the Sedition and Proclamation Act of 1938 and Publications Act of 1912.

Also speaking was the MISA Deputy Chairperson, Mr. Nkoale Ts’oana who thanked PAC for opening doors for media in covering the proceedings of the committee, saying that has made a great impact in promoting democracy and media in the country.

He noted that it is through the partnership that the committee and media had that the public is now aware of how the funds have been used over the years.

Mr. Ts’oana therefore appealed to journalists to do their work with transparency, urging them to take part in the reforms as it is through their participation that media reforms would take priority.

Delivering the UNESCO Director General’s message, Mr. Tieho Rankhone said press freedom is the cornerstone of democratic societies, saying all states, all nations are strengthened by information, debate and the exchange of opinions.

He added that while these periods are key moments of political liveliness, they also lend themselves to all the dangers of instrumentalisation, combined with practices such as obstruction, harassment, unlawful arrest and even murder which prevent journalists from doing their work freely.

“The existence of free, pluralistic and independent media is a prerequisite for the proper functioning of democracies. Independent journalism provides an opportunity to present facts to citizens and to form an opinion. Press freedom guarantees transparent societies where everyone can access information,” he said, noting that independent journalism analyses the world and makes it accessible to all working for the diversity of opinion.

Speaking on behalf of PAC, Mrs. ‘Mats’epo Ramakoae thanked MISA Lesotho for recognizing that there are Members of Parliament (MP) who do their work in the National Assembly.

She pleaded with journalists to be the watchdog that as MPs do the work they are entrusted to do as well as addressing community needs.

Present at the commemoration which was sponsored by UNESCO and Vodacom Foundation included the PAC Chairperson, Mr. Selibe Mochoboroane, Mr. Likopo Mahase, delegation from UNESCO and journalists from different media houses in the country.
Source: LENA 04/05/2019