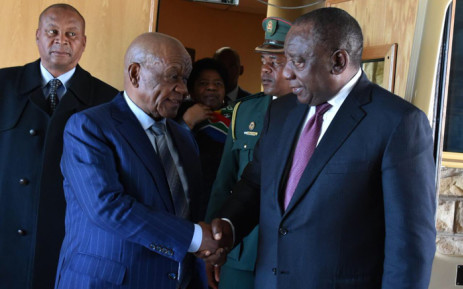 Dr Thabane was addressing the media following a one-day working visit by the President of South Africa, Mr. Cyril Ramaphosa. The press briefing was held in Maseru on Thursday.

He said President Ramaphosa’s visit in the country marks history as a local solution in Lesotho’s political instabilities has been established.

He commended SADC through President Ramaphosa for having supported Lesotho in this regard, saying the ongoing reform process will go a long way in improving the country.

Similarly, President Ramaphosa commended local political parties for having signed an agreement, which he said will smoothly lead to accomplishment of national reforms.

“This will ensure passing of legislation that would safeguard the entire process of reforms without any hindrances, therefore this convergence of agreement means the nation has a reason to celebrate,” he stressed.

He added that the signing of the agreement shows that all parties have agreed to move forward, saying Lesotho will no longer be on SADC agenda, as the upcoming report to SADC heads of state will have outlined the successes.

Speaking in an interview, the official Leader of the Opposition in Parliament, Mr. Mathibeli Mokhothu said they indeed agree to move forward with reforms for the interest of all Basotho.

President Ramaphosa was appointed the Southern Africa Development Community (SADC) facilitator to Lesotho in September 2014 when he held the position of Deputy President of the Republic of South Africa.

After assuming the position of President of the Republic in 2018, President Ramaphosa appointed former Deputy Chief Justice Dikgang Moseneke to lead the SADC Facilitation Team to Lesotho.

President Ramaphosa is due to present a report on the facilitation process to the SADC Heads of State and Government in August 2019 in the United Republic of Tanzania where regional leaders will particularly assess progress in constitutional and security reforms in Lesotho.
Source: LENA 04/07/2019