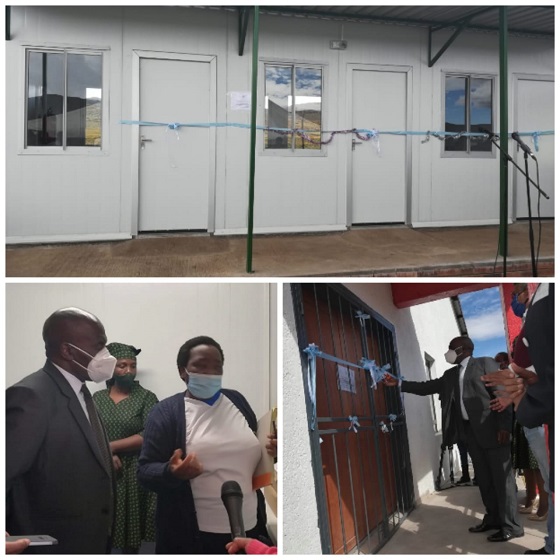 The Deputy Minister of Health, Mr. Nto Moakhi officiated the opening of a port health facility at Sani Top Border Post in Mokhotlong on Thursday.

Mr. Moakhi said the facility is intended to provide health services that include COVID-19 screening and testing and other diseases when they arrive at the border.

He said the opening of the port health demonstrates the Lesotho government’s commitment and efforts to ensure that the spread of the COVID-19 is controlled in the country in line with the international health regulations.

Mr. Moakhi mentioned that the establishment of the facility at Sani is just but one of the few that have already been opened in various border posts in the country, adding that more are yet to be established to provide health services to people when they arrive at the borders of Lesotho.

The Deputy Minister thanked SolidarMed for assisting Mokhotlong Hospital with the development of the port health and three other buildings which were also opened officially and they include an adolescent corner, screening and consulting area and vaccines storage rooms.

Mr. Moakhi and his delegation were also taken on a tour of the mentioned buildings during the event.

Also speaking at the ceremony, the District Medical Officer, Dr Kabelo Matjeane expressed gratitude to SolidarMed for the support it provided to Mokhotlong Hospital in improving the health care system for the benefit of the local community.

Also speaking was the National COVID-19 Secretariat Chief of Staff, Mr. Thabo Ntoi who said the community should utilise the port health in an effort to fight the spread of the coronavirus in the district.

In his remarks, the SolidarMed Lesotho Project Manager, Dr Ravi Gupta said SolidarMed is intending to help Lesotho to improve the health system, adding that buildings that were officially opened are a long-term investment done by the organization to Mokhotlong hospital to combat the COVID-19 pandemic.

SolidarMed is a Swiss organization for health working in Africa including Lesotho. It aims to improve the health care system for the people.