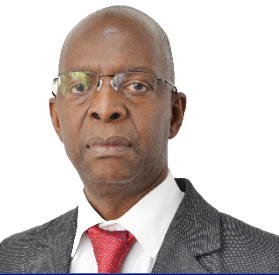 Minister of Trade and Industry

Minister of Trade and Industry

Honourable Dr Thabiso Paul Molapo is the Minister of Trade and Industry. He was appointed to this position and sworn in on 28th May 2020. He is a Member of the 10th Parliament representing Democratic Congress (DC) as Proportional Representation (PR). He is serving his first term as a member of parliament following snap elections on June 03, 2017. In 2012, Dr. Molapo contested for elections for the first time at Tsikoane Constituency during the General Elections in Lesotho, although his interest in politics commenced earlier.

Honourable Molapo attended several schools including, the Michigan State University between 1989 and 1991 where he did pre-medicine courses and obtained a certificate before proceeding to University of Guyana in 1991 to 1998 where he graduated in Bachelor of Surgery and Medicine.

Following completion of his studies, Minister Molapo worked as a Medical Officer at Queen II Hospital and Machabeng Hospital between 1998 and 2000. However, the wealth of knowledge and experience he garnered in the civil service made him to establish a Medical Arts Clinic at Maputsoe which was expanded to incorporate Medical Arts Pharmaceutical (Pty) Ltd, a distribution company in 2002 to date. Prior to pursuing career in medical field; Dr. Molapo graduated in Regional Technical College in Cork Ireland where he obtained Certificate in Electrical Engineering; and worked as Electrician at Lesotho Electricity Corporation for two years from 1980 to 1982.

In 2012, Dr. Molapo contested for elections for the first time at Tsikoane Constituency during the General Elections in Lesotho, although his interest in politics commenced earlier.

Honourable Molapo was born on the March 18, 1959 in Popopo, St. Monicas in the Leribe District.