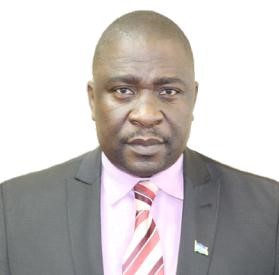 Minister of Development and Planning

Honorable Selibe Mochoboroane  is the Minister of Development Planning, he was appointed to this position in May 2020. He is the leader of Movement for Economic Change (MEC) and Member of Parliament representing the Thabana-Morena constituency.

Honourable Mochoboroane holds a Bachelor of Arts in Education at the National University of Lesotho (NUL) in 2011. He graduated from NUL and obtained a certificate in Business Studies in 2000 from Institute of Extra Mural Studies (IEMS- NUL). In 1993 -1998 he completed Cambridge Overseas Certificate (COSC) and Junior Certificate (JC) at Roulin High School and PSLE Certificate at Malumeng Primary School.

Honourable Mochoborane has held various positions in the Public Service before he was appointed tohis current position (Minister of Development Planning).

He worked as a Manager at Khatleli Savings and Credit in 2009-2012 and in 2001-2006 held a position of a Principal Teacher at Sekonyela High School.

While serving as a Member of Parliament in 2017-2020, Honourable Mochoboroane was appointed Chairperson of Public Accounts Committee (PAC) of the 10th Lesotho Parliament. In 2016-2017 he was appointed Minister of Small Business, Cooperatives and Marketing, 2015-2017 Minister of Energy, 2014-2015 Minister of Communications, Science and Technology respectively while in 2012-2014 he was assigned the Deputy Minister of Local Government and Chieftainship.

Honourable Mochoboroane played a major part in politics. In 2006, he was appointed President of the Lesotho Volunteering Student Association under the Lesotho Congress for Democracy (LCD) Youth League at NUL. In 2009, he was elevated to the position of Secretary General for the same LCD Youth League still 2011 when he joined National Cooperatives Steering Committee as a member.

The honourable Mochoboroane is a son of Mrs ’Maitumeleng Mochoboroane and the late Mr Michael ʺManyarelaʺ Mochoboroane. Born on the 27th July, 1977 at Taung, in the Mohale’s Hoek district. He grew up in his hometown of Malumeng Ha ’Matheko in the district of Mafeteng. He is married with three children, a son and two daughters.