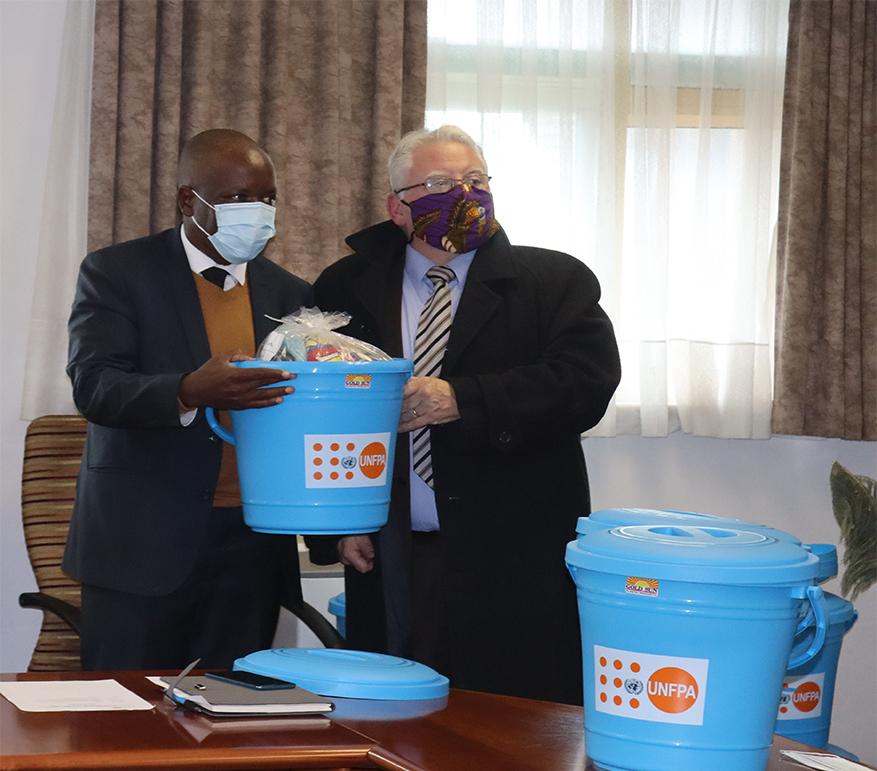 United Nations Population Fund (UNFPA) Country Representative Dr. Marc Derveeuw handed over dignity kits to the Minister in the Prime Minister’s office at the event held on Thursday in Maseru.

The dignity kits contain items like sanitary napkins, brushes and soap and are to be distributed by the Disaster Management Authority (DMA) to vulnerable young women and girls affected by climate change and COVID-19.

Speaking at the occasion, Dr. Derveeuw said the 900 dignity kits have been designed locally to help and restore the dignity of women and girls particularly in emergency situations.

Dr. Derveeuw also stated that the situation of women and young girls is of particular concern to UNPFA. He said It is important to maintain the dignity of women and girls in order to ensure their decision making at community and family level also highlighting that one of the consequences of climate change is an increase in migration.

He further stated that during the past two years UNFPA in Lesotho has given out over 3000 dignity kits through different channels such as the Office of the First Lady for redistribution.

He also noted that Lesotho has a couple of priorities in the political agenda to the important situation of women and young girls citing the roll out of the domestic violence law and the protection of women victims of rape.

When receiving the donation, the Minister in the Prime Minister’s office Mr Kemiso Mosenene said that dignity kits help women and girls maintain dignity during natural cycle saying preserving dignity is essential to maintain self – esteem and confidence which is of greatest importance to cope during stressful and potentially overwhelming situations.

He further emphasized that supporting women’s self – esteem and confidence also assists them in providing care and protection to their children but it is of great importance to mention that these dignity kits will help the girls in ensuring their concentration and confidence in schools. Adding that as a result of a natural stage girls face on a monthly basis, vulnerable girls are hit the hardest as they lack necessary kits to use during that natural period and in most cases they do not attend school properly or concentrate in class due to discomfort they suffer.