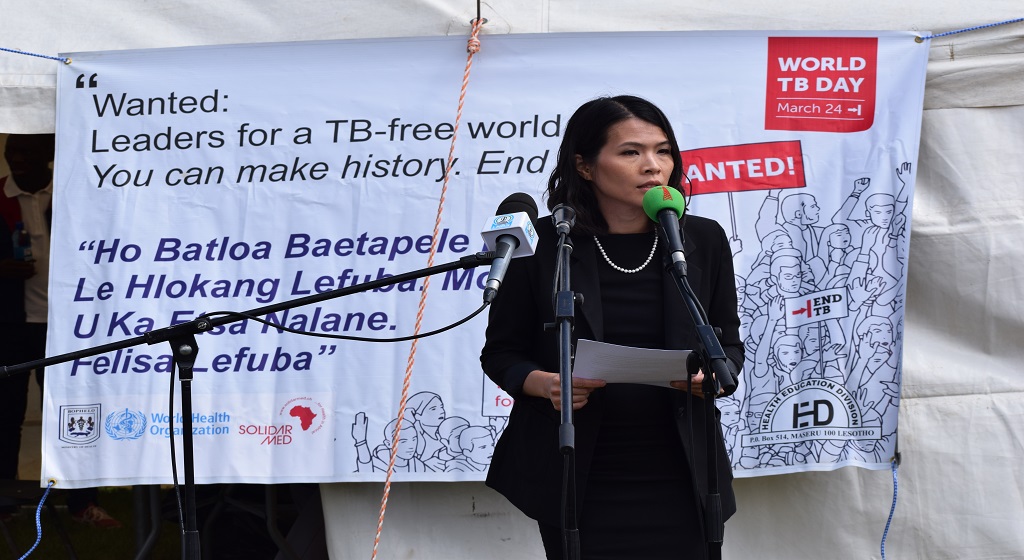 This Deputy Coordinator of the President’s Emergency Plan for AIDS Relief (PEPFAR), Ms. Carol Holtzman revealed this as one of the turnaround strategies to remedy Lesotho’s current situation in scaling up preventive therapy on TB.

She said despite accomplishments made to control Tuberculosis (TB) in Lesotho, there is still much more to do to control the disease, noting that less than half of the estimated 12, 000 TB and HIV co-infected patients are diagnosed each year with death among diagnosed TB cases remaining high while one out of 20 new TB cases are drug resistant.

Ms. Holtzman said the scale up of INH Preventive therapy (IPT) among people living with HIV has been well below expectations as only about a quarter of those eligible have received the intervention, saying  to turn the situation around, Lesotho could focus on  the three; thus to intensify case-finding, INH preventive therapy and infection control. She added that for each of these, there are interventions known to have great impact on TB in Lesotho yet they are however currently under utilised.

She therefore stressed that the first thing that could be done is intensifying case-finding because Lesotho currently has sufficient GeneYpert machines to diagnose all suspected cases of TB, however saying due to stock-outs of cartridges, a lack of maintenance agreement and limited staff in laboratories, these diagnostic machines are not being optimally utilised. She said GeneXpert represents a major advance in TB diagnosis and that not maximising the use of this technology represents a missed opportunity.

The second one she said, would be the INH Preventive therapy which is an incredible effective and low cost way to prevent TB in persons living with HIV and emphasising that IPT should be available for persons living with HIV. She said the last one should focus on infection control by ensuring that no one gets infected in Lesotho’s health centres and hospitals since such facilities are meant to help people get well and not to make them ill.

“There are multiple low cost interventions that can be used to address this problem, including ensuring that all facilities have adequate ventilation so that the risk on TB transmission is minimised,” she said.

The Ministry of Health is meanwhile currently engaged in TB Prevalence Survey which is a random household survey to establish the TB Prevalence rates in Lesotho.