Functions of The National Assembly

History of The Lesotho National Assembly

The April 1965 first-past-the-post type of elections produced a sixty-member National Assembly of the Parliament of the Kingdom of Lesotho with the Basotho National Party (BNP) in government. Since independence, Lesotho has undergone a remarkable metamorphosis in democratic and parliamentary dispensation.
Pursuant to the 1966 Constitution (and the 1993 Constitution as amended) Parliament, unless sooner dissolved, continues for five years from the date when the two Houses of Parliament first meet after any dissolution and then stand dissolved.

In 1969, Parliament was dissolved in preparation for the first post independence general elections of January 1970.
The main opposition party, the Basotholand Congress Party (BCP) won the elections. While elections were being announced, the government declared a state of emergency, suspended the constitution and ruled the country by decree. Political party activity was suspended, initially for a period of five years, which was subsequently changed in 1973.

On nomination day in August 1985, only the BNP presented candidates for election. The BNP won all sixty Constituencies. The government lasted for three months, being toppled by the military on the 20th January 1986.
Following the overthrow of the BNP government, the affairs and administration of the land were placed under the Military Council from 1986 to 1992. 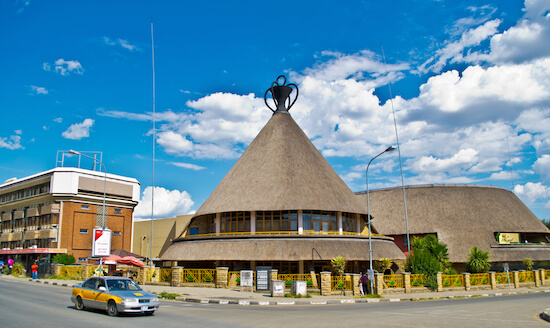 The Maluti Mountains, spurs of the Drakensberg range, extend north and south. They form a high plateau from 9,000 to 10,000 ft in height. The highest point is Thabana Ntlenyana (11,425ft) in the east. The rich volcanic soils of the foothills and mountains are some of the best in the country.

The sources of two of the principal rivers in South Africa, the Orange and the Tugeld, are in these mountains. Tributaries of the Caledon River, which forms the country’s western border, also rise here.

Look for the Basotho Hat (Mokorotlo) building in Maseru (near Victoria hotel) and you will find a souvenir of a lifetime in it — at a price that will make you smile. Check out some of these handicraft products at http://www.ecommerce.co.ls

Get Directions to Lesotho by clicking this link: Visit Lesotho

In 1990 the Military established a National Constituent Assembly to prepare for the democratization road map. The National Constituent Assembly had the powers of a lawfully constituted Parliament. Its mandate was to chart a way forward to the eventual democratic dispensation of 1993; the basis of which was the 1966 suspended Constitution.
In March 1993, the Basotholand Congress Party won a landslide victory by taking all the 65 constituencies. Out of the 65 Members of Parliament, only three were women.

This Parliament dissolved in 1998 to prepare for the May 23 elections. The Lesotho Congress for Democracy, a breakaway party from the BCP won 79 of the 80 seats in the National Assembly. The result of the 1998 elections was bitterly contested. Protracted debates on this matter eventually led to a decision in 2001 to hold an advanced election. The 2002 elections were held under a mixed-member proportional representation electoral model i.e. a mixture of first past the post and proportional representation.