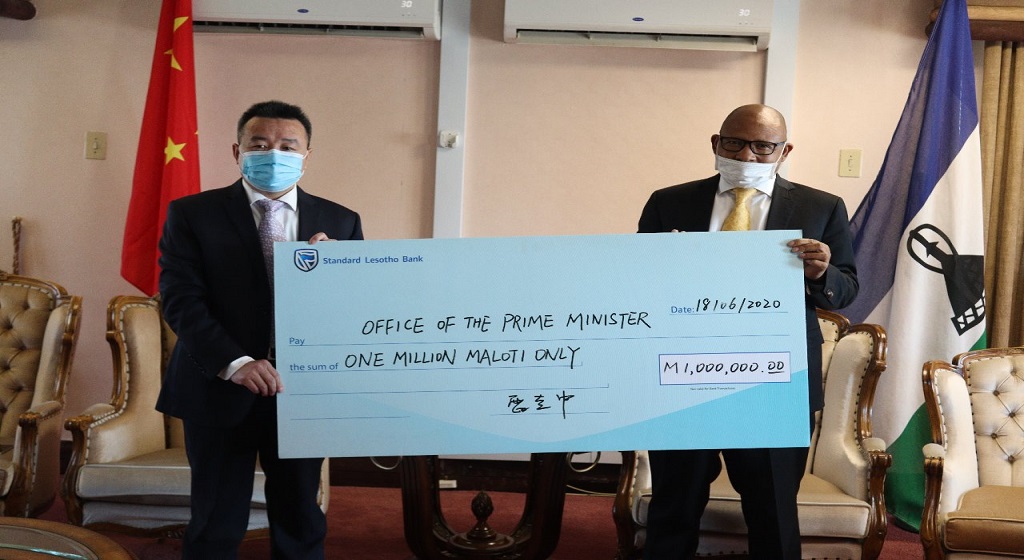 The People’s Republic of China donated one million maloti to Lesotho in response to hunger caused by severe drought as well as COVID-19 pandemic at the event held in Maseru on Thursday.

The Prime Minister, Dr Moeketsi Majoro received the donation on behalf of the Lesotho government while the Ambassador of China to Lesotho, Mr. Lei Kezhong presented the chegue on behalf of his government.

When receiving the donation, Dr Majoro said the donation came at the right time as Lesotho is in dire need as hunger has stricken the nation.

He thanked China and expressed gratitude on behalf of Basotho, saying they are thankful to China for this assistance and hoping that this assistance will continue to improve relations between the two countries for the benefit of their people.

He noted that China has assisted Lesotho in various areas including construction of roads, State Library, Lesotho Parliament Building, Manthabiseng Convention Centre to mention a few.

Handing over the donation, Mr. Kezhong said China realised that Lesotho has been faced with severe drought for the past three years hence the financial assistance.

He remarked that China and Lesotho have had good relations for past years and that China is happy to assist Lesotho. He therefore pledged his country’s commitment to continue to support Lesotho in future.