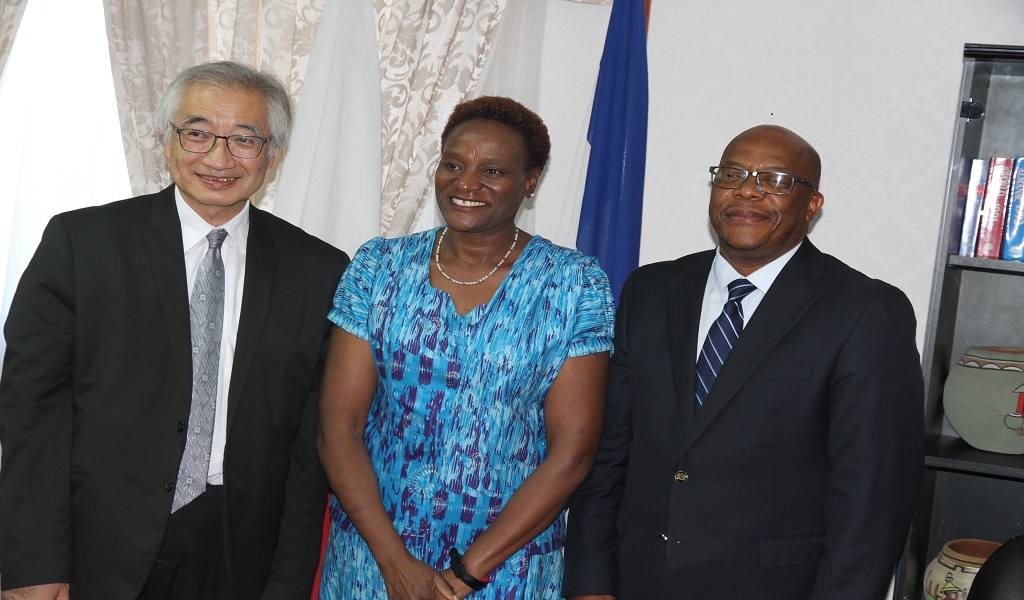 Speaking at the event, Minister of Foreign Affairs and International Relations, Mr. Lesego Makgothi said the agreement is a commitment that the food donation in the form of wheat flour will reach Basotho who are in dire need, saying these are men and women from all corners of Lesotho who cannot afford to buy wheat flour from our local retailers.

He said over the years, the government and people of Japan have remained true friends of Lesotho, saying they have always come to the aid of Basotho whenever the need arose.

He added that following an appeal for humanitarian assistance by the government of Lesotho a few years ago, Japan was one of the first development partners of Lesotho that responded with timely critical interventions aimed at addressing the immediate and life-saving needs in terms of facilitating access to food for the most vulnerable households.

‘We are indeed grateful for the continuous support on economic development activities, food and safety security, skills development, environmental issues, research and development, and clean energy technology that we receive from Japan’, he added.

Minister Makgothi expressed gratitude over the recent announcement by Japan that the government of Japan has agreed to generously contribute to the second Lesotho Border Security Project to the tune of US$500 000 which will be implemented through the International Office of Migration (IMO), saying the importance of border security is known to all particularly to country as vulnerable as Lesotho.

At the same event, Minister Counsellor of the Embassy of Japan, Mr. Shuichiro Kawaguchi said they have agreed to amend the bilateral food aid due to the serious food shortage in rural areas of Lesotho.

He expressed hope that the wheat flour under bilateral food aid will be distributed to the vulnerable groups of society.

He indicated that the government of japan has also decided to implement a new food aid through the WFP which is approximately M19 million for the purpose of procurement of about 200 tons of tinned fish from Japan, adding that the tinned fish will be distributed mainly to schools all over Lesotho and that it is expected to improve the nutritional condition of the school children.

‘We realise that Lesotho is currently experiencing lower rainfall levels than average and this has already affected planting and increased the risk of low yields in the upcoming harvest. Dry conditions are a result from El Nino and it seems that El Nino will be continuing for a while’, he added.

Mr. Kawaguchi emphasised therefore that the government of Japan would continue to contribute to improving the lives and food security situation for the people of Lesotho who have been suffering from severe drought over the years through these two food aids.

On the other hand, WFP Country Director, Ms. Mary Njoroge said the contribution from Japan of M19 million comes at a crucial time when WFP is experiencing funding shortfalls to support school feeding programme.

She noted that WFP has been supporting the Ministry of Education and Training in implementing the school feeding programme since 1965, saying the provision of school meals is critical in improving access to food as well as nutritional status of primary school learners especially given the nutrition challenges faced by children in the country.

She stated that provision of school meals curbs poor nutrition and food insecurity that make children more vulnerable especially given that school feeding is one of the largest safety nets programmes in the country, adding that majority of learners assisted by WFP come from rural areas with high rates of malnutrition, HIV prevalence and food insecurity.

Meanwhile according to the Integrated food security Phase Classification (IPC) for the period May to August 2018 which was carried out by the Lesotho Vulnerability Assessment Committee (LVAC), a projected 257,283 people in the rural areas and 50,000 in urban areas required urgent action to protect their livelihoods and reduce the food deficit from September 2018 to February 2019.

In the latest IPC assessment conducted in November 2018, the number of vulnerable people has increased to 273,635 representing 19% of Lesotho population.